Nvidia (NASDAQ:NVDA), with its market capitalization of more than $300 billion, is one of the largest publicly traded U.S. chip companies. In the post COVID-19 run-up, it overtook Intel (NASDAQ:INTC), which had traditionally held the mantle. Now, it’s wowed investors and game enthusiasts again with its recent graphics card launch.

Nowhere is gamers’ opinions on the new graphics launch more obvious than in the meme below. With that announcement, it begs the question, is AMD’s (NASDAQ:AMD) Big Navi still relevant?

Graphics cards have traditionally been competitive. The desire for gamers to play more and more intensive games led to the start of Nvidia and its success. That’s slowly expanded to the use of GPU and their highly parallelized capabilities in artificial intelligence and other major computing fields. Throughout this time, graphics cards have grown.

Sometime, going into the early 2010s, AMD lost its competition with Nvidia. It lost to competition on the high end for graphics cards, and since then, it has consistently been behind. However, as AMD has become competitive with Intel from a CPU standpoint (you can read about that in our article here), the company is seeking to become more competitive in graphics cards.

Currently, AMD’s next competitive graphics card is supposed to its Big Navi card. This card will come with its new RDNA2 architecture. Big Navi is expected to be built on Taiwan Semiconductor (NYSE:TSM) 7 nm process. Being competitive on the high end with Nvidia could not only result in high margin profits but could also open up significant revenue.

Nvidia launched 3 graphics cards yesterday, the 3070, 3080, and 3090. The 3070 is expected to be equivalent to the 2080 TI, at a $499 price point. That’s the first two generational jump in Nvidia graphics cards generation over generation since 2004. That enormous jump is caused by switching from 12 nm to Samsung’s (OTC:SSNLF) 8 nm process.

The key benefit here is that Samsung’s 8 nm 56 million transistors/mm is better than AMD’s Navi 7 nm process of 41 million transistors/mm. With GDDR6X and a more than doubling of Nvidia’s CUDA cores, the improvement across the board for Ampere is significant. Yours truly owns AMD stock but plans to buy the 3080 GPU on its September 17th release.

AMD’s response was always going to be Big Navi. However, few were expecting a two-generational equivalent jump from Nvidia. Unfortunately, Big Navi hasn’t been revealed here, so we’re operating on leaks. 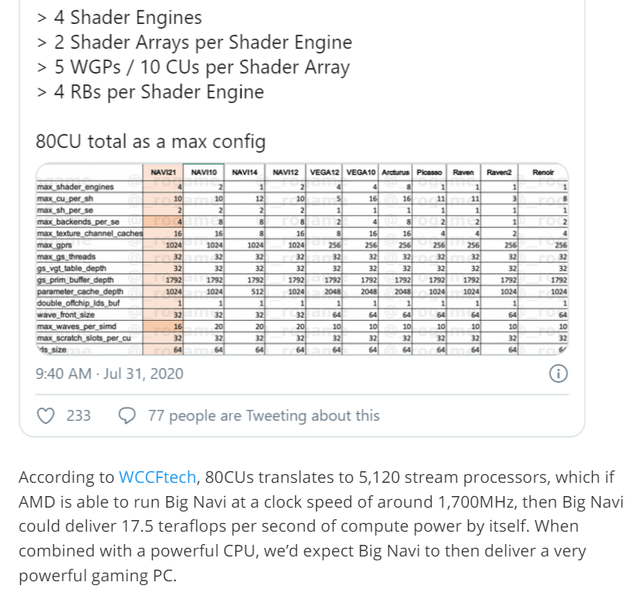 The above leaked Big Navi specs are highlighted above. The CPU is seen as having 80 CUs with 5,120 stream processors and, at a 1700 MHz clock speed, 17.5 teraflops per second of compute power. That suggests Big Navi could be 30-50% faster than the 2080 TI. Unfortunately, the strength of Nvidia’s launch is where Big Navi hits an issue.

It’s also worth noting here that Nvidia has held off on releasing the 3080 TI. We expect that the company is holding off to announce pricing for the GPU as it waits to see what AMD launches. If AMD has a top-tier launch, it will price the 3080 TI likely closer to $799 or $899 versus the $999 2080 TI launch price.

That’s tough news in a large market. The GPU market is currently more than $18 billion, and that’s expected to grow to $35 billion by 2025. That represents an enormous market, and AMD currently has a 20% stake in it. Being able to expand its market share would be enormous for AMD and its ability to generate long-term revenue.

Our forecast is that what happens comes down to pricing. For AMD to make a significant splash with Big Navi, it needs to price the GPU at $399 likely. With forecasts showing Big Navi launching at $600-800, that would mean the company has to look at a near 50% price drop. That would eat up the majority of the company’s margins, but it might be worth it for revenue to be competitive.

Otherwise, unfortunately, the numbers indicate that Nvidia blows AMD out of the water. There is one other factor worth paying attention to. With no Nvidia pre-orders, some are expecting Nvidia will have large supply shortages. That could push impatient people towards AMD regardless of the pricing decision. A less efficient GPU is better than none.

However, we’re expecting Nvidia to do incredibly well, and if the tech sell-off continues, recommend investors continue selling their AMD stock for Nvidia stock.

At that point are Big Navi GPUs still relevant. So far, they seem roughly equivalent to the 3070, meaning they need a $400 (approximately) price point to truly be incredibly exciting. That’s much lower than current forecast prices, and there could be improvements, but it remains to be seen. However, Big Navi and AMD are clearly in trouble.

Disclosure: I am/we are long NVDA, AMD. I wrote this article myself, and it expresses my own opinions. I am not receiving compensation for it (other than from Seeking Alpha). I have no business relationship with any company whose stock is mentioned in this article.

The recovery period across markets after the drawdown earlier in the year has hit its six-month anniversary. Investors who have taken advantage of the bounce-back may be looking to preserve their gains and tilt their […]