In today’s Amazon (NASDAQ:AMZN) article, I demonstrate why Amazon’s stock will continue to rise even from current levels, why you should pick up shares today, and what your expected return may be if you decided to buy today. Additionally, I explore the idea that Amazon could face anti-trust regulation, which could have deleterious effects on Amazon’s ability to generate money from, for example, its marketplace.

I view anti-trust regulation as highly unlikely for several reasons, not least of which is that Amazon uses no trusts, patents, or government lobbying to execute its dominant business operations. But we will explore this to a much greater extent later on.

In January, I was pounding the table as to the undervaluation of Amazon due to the explosive growth of its ads business and its cloud business, the latter of which is worth at least $500B, and possibly closer to $1T in a world of expansionary monetary policy. It’s been exceedingly obvious for the last year that the market was getting Amazon wrong, but at my firm, L.A. Stevens, we thoroughly enjoy when the market can’t figure out the value of a company, as it allows us to accumulate shares, which we did.

In order to arrive at a valuation, I will use a sum of the parts valuation technique, by which I will identify two primary ideas: 1) Is Amazon presently undervalued? 2) What can we expect in the way of annualized returns from Amazon in the 2020s?

Below I will identify the segments for which I will create valuations:

Below can be seen these segments broken out in Amazon’s 10-K.

Unfortunately for Amazon investors, the company does not break out its margins by segment. In fact, Amazon’s financials are altogether rather opaque, aside from the one gem, AWS, whose margins they strategically deploy so as to ensure the valuation of the company remains propped up.

For this reason, I will primarily focus on AWS’s valuation and price target, then I will add to that valuation extremely conservative estimates of the values of Amazon’s 4 other business segments, so as to arrive at a total fair value.

Now let’s normalize this value for post 10-year growth, and arrive at a 2030 price target.

The above means that if AWS were a standalone business, it would be worth 50% more than the entirety of Amazon by 2030. This dynamic may happen even sooner; however, as we will see, Amazon’s other high margin segments are growing even faster than AWS.

As was mentioned above, Amazon’s 10-K leaves a great deal to be desired; in that, they provide little in the way of margins for each of its respective business segments. Notwithstanding, I provide extraordinarily conservative estimates below.

So none of the above was assumptions, as I simply extracted the values from Amazon’s latest 10-K. Below I assume the margins and valuations of each of these segments, based on comparative analyses.

Source: Estimates Created By Myself (Aside from AWS)

To further elaborate portions of the above chart, I found peers, in terms of revenue growth rate, margins, and valuations, from across the market. Some of these peers included Facebook (FB), Alphabet (GOOG) (GOOGL), Adobe (ADBE), and Salesforce (CRM).

In light of this sum of parts valuation, we can see that the market currently undervalues Amazon by approximately 28%, which is much better (in terms of the market being efficient) than prior to the company’s recent earnings release.

Expected returns for Amazon is quite challenging, as between the company’s annual $36B R&D budget and its annual $17B in capex, there’s no way to truly determine how much of that money could fall into investors’ pockets. What’s more, once the company decides to start allowing more cash to fall to the bottom line, what will its capital return program look like? This could massively impact the rate at which FCF per share grows.

Simply put, there are a lot of unknowns; however, what we do know is that within Amazon, there are 4 rapidly growing high margin businesses capable of producing massive sums of free cash flow. Therefore, creating a conservative DCF model is actually quite easy.

In my previous valuation, I chose FCF to equity to grow at 25% annually for the next 10 years, and while that even may prove to be conservative for reasons I will discuss next, I chose 20% this time to be ultra-conservative.

That is, Amazon could literally grow its free cash flow 100% overnight if it so chose, but the company continues to slam excess cash back into its R&D budget. As can be seen below, Amazon’s R&D budget outstrips its competitors by a very wide margin. 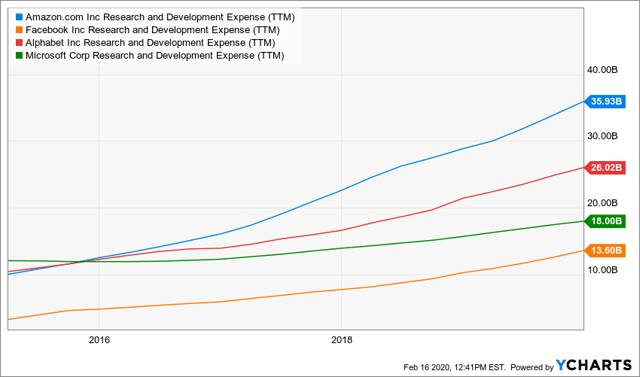 And the gulf appears to be only getting wider. Amazon will likely continue R&D spending at this clip so long as Jeff Bezos remains at the helm, which could easily be another decade, as he is only 56 years old.

What’s more, if Amazon did take its foot of the R&D pedal and allowed cash to fall to the bottom line, a capital return program would massively fuel the company’s returns.

For new readers, I usually employ a 3 Step Valuation model, in the third step of which I project a 10-year price target. I do this because any investment horizon should be at least on a 3-, 5-, or 10-year basis. Paradoxically, when one invests for the long term, they actually perform better in the short term than if they had focused solely on the short term.

Below, you will see a “normalization” of the share price at year 10. That is, in a DCF model, one only finds the degree of over or undervaluation in the present moment. This does nothing for the investor who’s trying to identify long-term compounded returns, i.e., a projected CAGR.

Therefore, one can expect a CAGR, conservatively, approximately 12.03% for the next ten years, if one were to buy at $2,135.

Of course, this could be supercharged by a capital return program or by Amazon reaching a point at which it allows much more cash to fall to the bottom-line or by Amazon monetizing Alexa. Or, Amazon could develop some other business segment with its $36B R&D budget.

But 12.03% annualized is certainly nothing to scoff at.

All of the largest tech companies are currently receiving the same three discounts.

With respect to the third point, Amazon does face privacy regulation, as it harvests users’ data as much as any company on earth, so as to provide targeted ads (which as we saw is a high margin business segment growing at 40% annually).

I’d be very interested to hear a response to the following question from the anti-trust hawks out there, or anybody with an opinion on the subject:

If your answer is “we should apply tariffs uniformly so as to protect American jobs, regardless of whether they could be done better elsewhere”, then at least you’d be logically aligned if you also supported anti-trust regulation for America’s tech giants.

The anti-trust arguments for the likes of Amazon and Alphabet (GOOG) (GOOGL) revolve around the fact that they de facto control the world’s digital marketplaces, and as such, they can manipulate what’s shown, which is anti-competitive behavior.

But who are we protecting from this anti-competitive behavior? Consumers or businesses? People often cite Yelp’s issues with Google’s similar offering. In fact, Luther Lowe, who is Yelp’s head of public policy, stated the following:

“Forty percent of Google search is local,” says Luther Lowe, the company’s head of public policy. “There should be hundreds of Yelps. There’s not. No one is pitching investors to build a service that relies on discovery through Facebook (FB) or Google to grow, because venture capitalists think it’s a poor bet.”

Thankfully, Mr. Lowe is not responsible for actually making public policy, because in no way should there be 100s of Yelps. Our youth should not be aspiring to create the next Yelp, nor should they be aspiring to create a new Alphabet, unless Alphabet’s service becomes so bad or so costly as to warrant a new competitor, but that’s far from the case. It’s free and fantastic.

My point is that if it were up to Mr. Lowe and other anti-competitive proponents, everybody should be inventing the next Yelp in the same way that everybody should be aspiring to manufacture garments from textiles, instead of importing it. In the same way that free trade can be considered an immediate “technological advance” for a society that lacks the item for which they trade, dominant tech firms can be seen as solidified, low-cost technological advances on the shoulders of which the next generation of inventors will create new ideas and innovations.

It would be exceedingly unwise for the government to intervene so as to create 10 Alphabets or 100s of Yelps. Society does not need that. Society needs AI innovation and carbon neutral energy innovation.

Anti-trust hawks who target Alphabet, Facebook, and Amazon are missing the idea that humans should not be focused on building another Yelp, because there are already a series of them competing, and the world doesn’t need another. The world needs individuals who aspire to create the next big thing on the backs of what’s already been created, just as free trade can enable societies to achieve an immediate technological advance (e.g., cheap transportation via imported cars) so that the society can home in on a new more valuable innovation.

For these reasons, anti-trust regulations based on the idea that we need more Amazons or more Yelps seems unlikely, granted the U.S. government exercises common sense on the subject.

While Amazon may be a massive company, it has 4 segments growing above 25%, three of which have margins more akin to a Facebook or Alphabet. Therefore, the company will continue to grow free cash flow immensely, which will continue to drive the value of the company ever higher.

I rate Amazon as a buy here, but not a strong buy, due to the expected 12.03% annualized return one could expect.

As always, thanks for reading, and happy investing!

Disclosure: I am/we are long AMZN, FB. I wrote this article myself, and it expresses my own opinions. I am not receiving compensation for it (other than from Seeking Alpha). I have no business relationship with any company whose stock is mentioned in this article.

City of Lodz, Poland. View of the White Factory. whitelook Introduction The Polish equity market has risen over 50% since the last calendar year quarter of 2022 till today. In comparison, the S&P 500 Index […]