Ally Financial Inc. (ALLY) recently reported a decent set of 4Q19 numbers. Adjusted EPS of $0.95 (core EPS of $0.93) marginally beat consensus as the company continues to benefit from growing application volumes and a shift in originations ($8.1 billion in 4Q19) toward the higher-yield used vehicle loans. Further, the 2020 outlook provides for substantial origination growth, as the company drives stronger engagement within its existing dealer base.

While the 2020 guidance also came in over and above consensus, shares continue to trade below tangible book value. With steady EPS tailwinds, a strong capital position and further buybacks at a discount to book value, I see further accretion to the company’s earnings profile going forward. Assuming ALLY eventually converges toward tangible book, a $40 valuation remains my base-case scenario.

A Closer Look at 4Q19 Earnings

Earnings: 4Q19 adjusted EPS was $0.95 vs. $0.92 in the corresponding quarter in the previous year. Adjusting for a lower-than-expected tax rate, I peg ALLY’s core EPS at $0.93, marginally beating consensus’ $0.92, driven by higher ancillary fee income and improved provisioning. 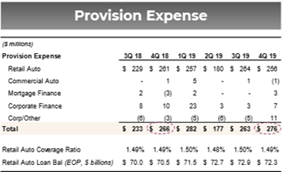 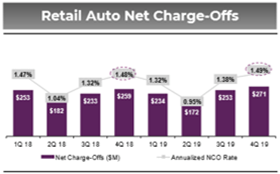 Auto Finance: The segment reported a total pre-tax income of $401 million, up $66 million YoY (down $28 million QoQ), driven by a YoY increase in net financing revenue due to higher retail yields and balances, offset by lower commercial assets primarily from lower inventory levels. The sequential decrease was attributable to seasonally lower lease remarketing gains and declining benchmarks, impacting the dealer floorplan. US auto earning assets were down $3.5 billion YoY in 4Q19 to $113.6 billion, due to lower commercial assets partly offset by higher consumer assets. Importantly, ALLY’s dealer base expanded for the 23rd straight quarter to ~18,300 in 4Q19, implying a relationship with over 90% of US franchise dealers. 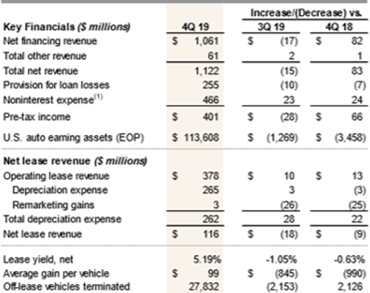 Originations: The quarter saw encouraging loan and lease origination growth to $8.1 billion, with the mix tilted towards used vehicles at 49%. Importantly, more volume was produced from growth channels (44%) compared to GM (27%) and Chrysler (FCAU) (29%). For the full year, there was a $900 million improvement in loan and leases origination to $36.3 billion, driven by ALLY’s strong customer engagement, which helped the company see through 12.6 million decisioned applications. 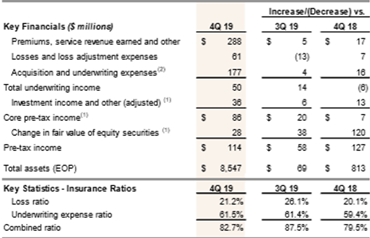 Deposits, Consumer & Commercial Products: At the end of 4Q19, total deposit balances stood at $120.8 billion, up 14% YoY, on a customer base of 1.97 million, which increased 20% (or 322k customers) over 2018. The growth was driven by retail deposits, which stood at $103.7 billion, representing a growth of $14.6 billion, or 16% YoY. Management highlighted that millennials represented nearly 60% of new customers during the year, and the majority of incoming balances came from traditional banks. Also worth noting is that ALLY has been able to maintain its solid customer retention ratio, which stands at 96%. 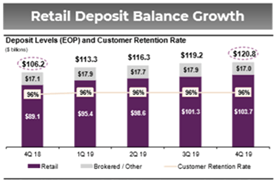 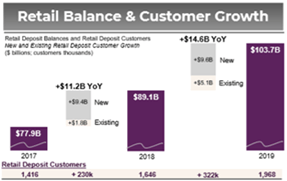 Corporate Finance: Held-for-investment balance increased 23% YoY to $5.7 billion at the end of 4Q19. Crucially, asset-based products accounted for over 90% of the growth.

Mortgage Finance: Held-for-investment balance increased 7% YoY to $16.2 billion at the end of 4Q19. The Ally Home direct-to-consumer originations were $1.0 billion in 4Q19, up from $0.2 billion in 4Q18. 56% of the originations came from existing customers, while 84% of DTC originated volume was sourced through Better.com.

Additionally, during the quarter, ALLY closed the acquisition of Health Credit Services and is now rebranding it as Ally Lending, bringing a portfolio of ~$200 million and $67 million in new volume with it.

Perspective on Current Expected Credit Losses (CECL): Day 1 reserves are set to increase 106% ($1.3 billion) – at the lower end of the guided 105-115% range, which will reduce CET1 ratio by an estimated 17-19 bps. Given an expected increase in complexity from the CECL, beginning with 1Q20, the estimate of lifetime losses will be based on a 1-year “reasonable and supportable” loss forecast, followed by a 24-month linear reversion to the mean. That said, the underlying risk profile of the balance sheet and lifetime loan profitability should remain unaffected.

Management guided for a 10-15% YoY adjusted EPS growth, translating into an EPS outlook of ~$4.10-4.30 for 2020, roughly in line with consensus. With regard to net financing revenue, management reiterated its expectation of exceeding $5 billion in 2020, while NIM is expected to expand by double digits. The latter is a key positive considering ALLY’s operating leverage is largely driven by its NIM in a low-rate environment, given its liability-sensitive profile and continued mix shift in auto origination towards a 7%+ yield profile. Disappointingly, management did not guide on 2020 provision expense except that they are reserving retail auto loans at ~3% vs. 1.5%, and that the resulting Day 2 impact to 2020 EPS will be modest.

Retail auto NCOs are guided to come in the lower end of 1.4-1.6% for 2020, but any deterioration in unemployment could accelerate credit losses. However, ALLY’s focus on more creditworthy borrowers than its peers – as witnessed by $5.0 billion of the $8.1 billion in 4Q19 originations coming from Super Prime and Prime borrowers – might mitigate this impact. Overall, I think the guidance was positive as the starting point for EPS growth moves higher, with improved growth assumptions and larger efficiency improvements, highlighting the bull case. 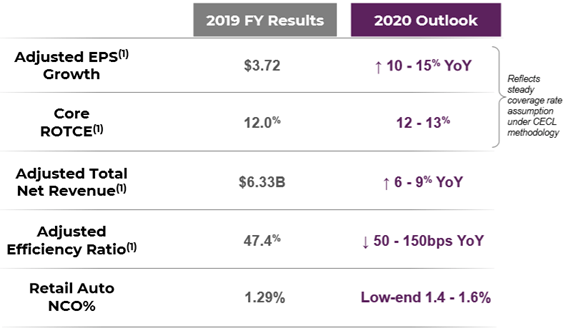 ALLY continues to trade at a persistent discount to tangible book (vs. an ~20% premium for the industry average), despite improving performance across key metrics (e.g., ROA, ROE) and continued earnings growth. Further, an improving used car market provides a favorable backdrop for the company’s origination growth, along with the health of its credit performance and its expanding product offerings. With the stock trading at ~90% discount to forward adjusted tangible book, I believe it trades at attractive levels – a price convergence toward adjusted tangible book value per share should drive ALLY to ~$40.

undefined undefined/iStock via Getty Images AMD (NASDAQ:AMD) has been such a strong performer that Wall Street seems to be in disbelief. While the long term growth story of semiconductors remains unchallenged, consensus estimates are arguably […]

matejmo Undoubtedly, the current investing environment for investors is as tough a one as there has been for some time. Compounding interpretation of the data now is the issue of the pandemic and the consequences […]