Airbus ( OTCPK:EADSF) recently provided its order and delivery numbers for September. We analyzed those numbers and observed that order inflow flatlined while deliveries showed an uptick. The publication of the September report also marks the end of the first half of 2020 for Airbus and it has been one that likely will be remembered.

In this analysis, we widen the focus a bit to see how the first half of 2020 stacks against last year as it gives good insight on where the differences have been made this year and last year. We will do that for the order side of the equation, but also for deliveries and look a bit deeper into values and program specifics. This should give you a feel of the severity of the current crisis and how that’s already impacted jet makers such as Airbus while the coming months will be extremely challenging as well. 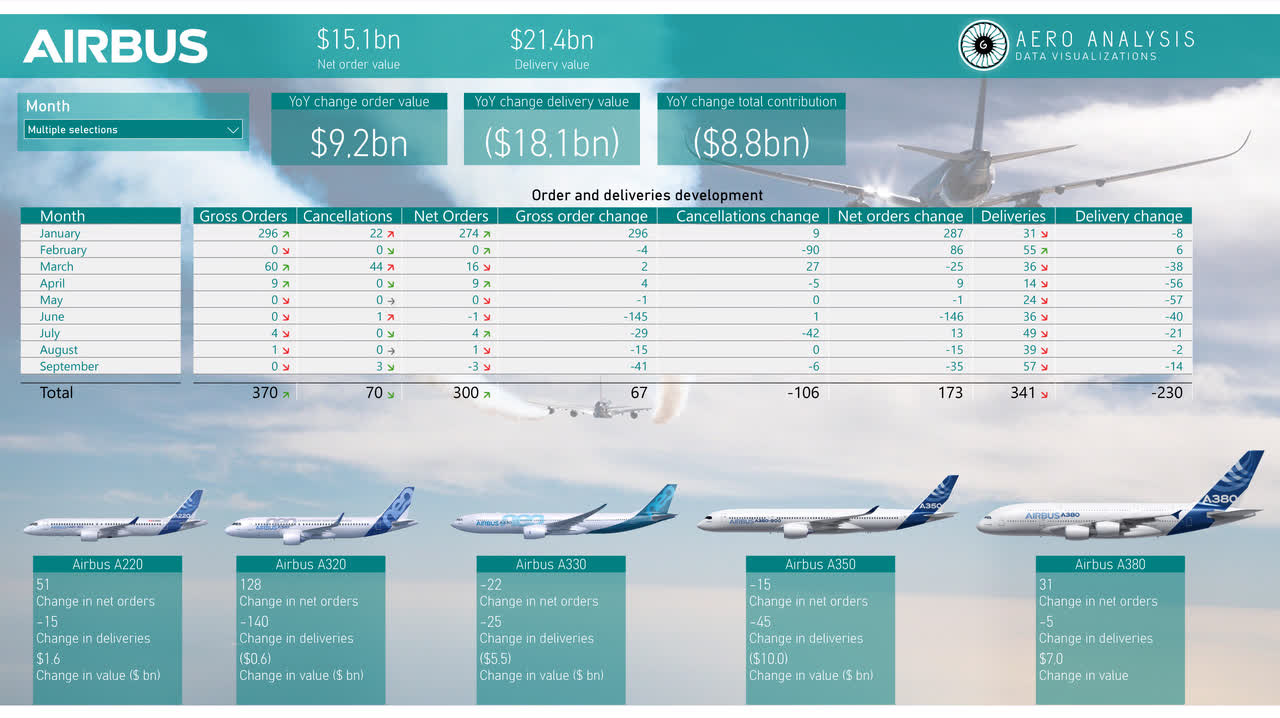 For this analysis, we used the newly-developed Airbus KPI Monitor which we have made available to subscribers of The Aerospace Forum. It’s packed with information, so we will go through it and expand where needed. The year-over-year changes can be roughly divided into an order component and a delivery component, so that’s also how this analysis will be divided.

First we look at the order component, which does not just include order inflows but also cancellations. The gross orders column shows us that year-to-date Airbus saw order inflow of 370 units. So, Airbus booked just five gross orders during the third quarter and actually continues a rather weak trend. The year started promising with 296 orders, but after that order inflow was almost continuously weak. The exception to this was March, when AerCap (AER) placed an order with Airbus for 50 Airbus A320neo aircraft and an unidentified customer, likely Delta Air Lines (DAL), placed an order for 10 Airbus A350-900s.

So, while there has been order activity it’s also true that the impact of the pandemic already was starting to become visible for Airbus on the order side of the equation and the pressure have been visible for at least six out of the nine months so far. That’s not just a weakness specific to Airbus, but truly shows the overall weakness of the market and the uncertainty ahead.

The gross order change shows us where the differences are being made compared to last year and as I previously pointed out those signs are not promising. Airbus started the year on a strong note with 296 gross orders as Air Lease Corporation (ALC), CALC and Spirit Airlines (SAVE) placed big orders with the European jet maker. February through May showed that even though orders were quite low, year-over-year there barely was any difference between a year as we have it now (with a pandemic) and last year (without any pandemic). That was surprising to say the least as we are continuously reading on how order inflow is drying up. June was a different story as order inflow fell by 145 units year-over-year. You could say that this clearly shows the impact of the pandemic, but the side note to be placed here is that in June last year Airbus launched the XLR variant of its Airbus A321neo during the Paris Airshow. The Paris Airshow is hosted every other year in June, while the Farnborough International Airshow is hosted in July. Were it not for the airshow this year to be cancelled, we would have had the Farnborough Airshow along with its associated order inflows in July. In the third quarter of 2020, we saw order inflow fall further. In July this was 29 units lower, 15 units in August and 41 units in September. So, we are seeing that January, April and March had higher order inflow and Airbus is leaning on those months and mostly the January month to realize a nine-month uptick on 67 units in gross orders.

I previously expressed that expectations that the differential in order inflow would accelerate and that seems to be happening:

In Q1, order inflow was still 294 units higher which include 296 units from January which really was the only month in which COVID-19 was a lesser concern to the industry because by February it already was affecting China quite a bit. In Q2, order inflow was 143 units lower compared to last year but that includes a 145-unit pressure from absence of an order show this year. Admittedly, an order show wouldn’t provide robust business but June or July, depending on the year, are always a bit of outliers in the annual comparisons. Excluding June, the order inflow would be up just two units, which is a significant reduction from the Q1 figures. In Q3, order inflow was consistently lower each month resulting in the Q3 gross order inflow to be 85 units lower compared to Q3 2019.

What we are left with is a 67 units higher order inflow for the first nine months of 2020, but that lead is tapering each quarter and the declines seem to be accelerating. I think none of that is a surprise, we can’t expect any jet maker to outperform while the crisis we are facing is unprecedented for a peace-time event. We should just take note that this is actually happening. 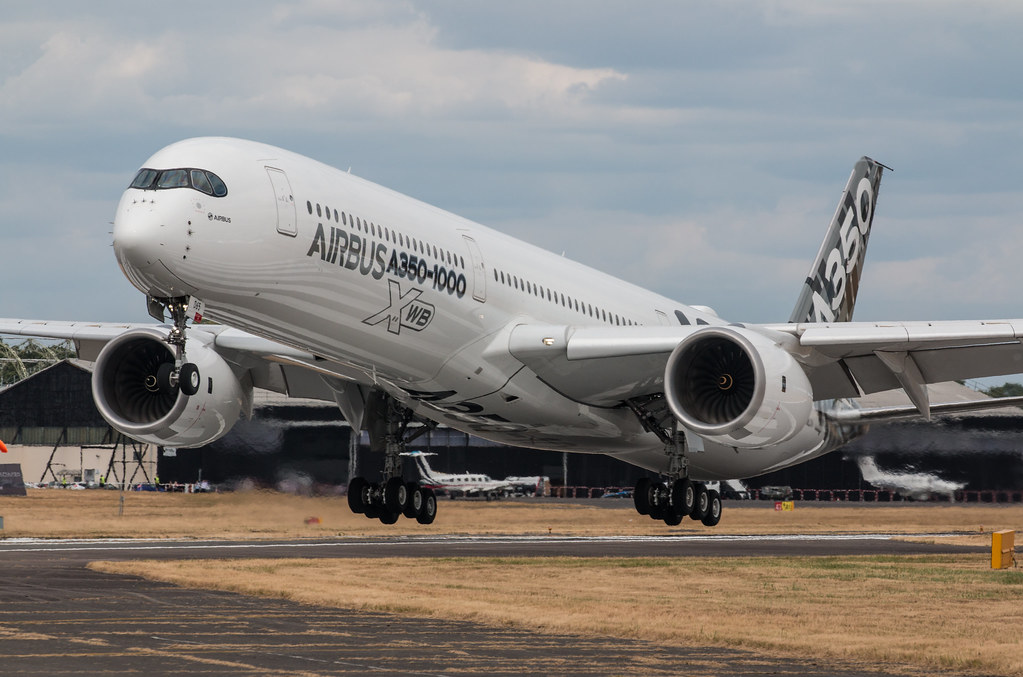 What might be most surprising to many are the relative low numbers of cancellations. In January, those cancellations were driven by Avianca, while in March they were driven mostly by Avolon and LATAM. The connection to the pandemic here is not evident, because these contract terminations are from airlines that already were facing financial pressures or simply positioning themselves as anticipated (even before the pandemic). In Q2, there was just one cancellation from Avolon for one Airbus A330neo and that cancellation to some extent also was tied to the financial position of Avolon and in Q3 we had a cancellation from an Australian lessor for three Airbus A220-300 aircraft. So, while we are facing a crisis the cancellation numbers are very low to date, where not even all cancellations should be attributed to the pandemic.

Last year, cancellations for the first nine months were driven by the demise of Germania, busted growth ambitions of Etihad Airways, the demise of the Airbus A380, difficulties at Avianca and order book rationalization for the Airbus A220 program. All with all, cancellations were 106 units lower in the nine months of 2020 and that shows that while there are views that there’s an unprecedented cancellation rate, for Airbus this is not true. In the current state of the industry, many customers will not outward cancel orders but defer them where possible, and the numbers show exactly that.

Combining gross orders and cancellations, we see net orders at 300 units, which is 173 units high compared to last year. Sequentially that’s a deterioration, but really not all that bad (in fact, it’s strong). That improvement is driven by higher gross orders for 40% and for 60% by lower cancellations. Is it a sign of strength? Partially. Last year, Airbus saw a big realignment in the order book and that drove cancellations, and this year the order growth really is realized by one single month of strong order inflow. I have little doubt that as the year progresses we will see that year-over-year lead fade and turn into order declines. Overall, what stands is that there’s a surprising improvement in net order activity. Net order value stood at $15.1B for the first nine months of 2020, marking a $9.2B improvement.

Where the pain really shows is on delivery level. Airbus was able to show just one month of year-over-year increase in deliveries and that was in February. That likely has to do with Airbus pushing out many aircraft in December, leaving the company with the month of January to restart production and increase its inventory levels again leading to January productions being delivered late in the month or even in the subsequent month.

In February, Airbus’ plant in China shuttered temporarily and at the time it was considered a non event by some of my readers, but it essentially became the starting point of Airbus assembly facilities around the globe temporarily shutting down one by one. Once assembly sites re-opened, the production rates were throttled back significantly, leading to delivery volumes to fall by 230 units, signaling a 40% drop. Unsurprisingly, the Airbus A320 and Airbus A350 which were supposed to be the company’s main growth vehicles accounted for 80% of the drop in deliveries. The current production rates leave no doubt that the year-over-year decrease in deliveries will widen as we march toward the end of 2020. However, we do see that our previous expectation of the declines themselves becoming less negative did materialize and instead of looking at a 50% reduction in deliveries we are looking at a 40% reduction and while still steep this fits the trajectory that Airbus stipulated for itself.

If we look at the year-to-date numbers we conclude that the $21.4B delivery value shows a $18.1B decline in deliveries.

Combining the orders and delivery values what we can conclude is that year-over-year orders were up $9.2B while deliveries were down $18.1B, meaning that the combined value shows a year-over-year decrease of >$8.8B. So, the KPI shows that the pressure is there but it is not so much reflected in the net order numbers although I do believe that will occur toward the end of the year, but is most prominently featured in the delivery numbers, but concluding the nine months ended for 2020 I can only say that while order inflow is still up year-over-year that lead will continue to taper, but cancellations are looking extremely good. Partially this is caused by high cancellations last year, but also in absolute figures I believe the cancellations numbers look good for 2020 given the circumstances. The delivery figures obviously show the pressure and that is the ugly reality from the industry where I find the current recovery in the delivery profile a huge positive. So, we are heading for a down year but despite the pressures I believe Airbus is managing extremely well.

*Join The Aerospace Forum today and get a 15% discount*