Adams Diversified Equity Fund (ADX) isn’t a closed-end fund that is covered too often. This is probably for the simple fact that it doesn’t fit the ‘mold’ of a typical CEF that most investors are looking for. ADX pays a small quarterly distribution, then a significantly larger year-end special that includes all the capital gains and income that is required. This allows the fund to avoid income taxes on the fund level. It also allows them to maintain a regulated investment company, or RIC, status. The fund has certainly been around for quite a while too, with an inception year dating all the way back to 1929. Previous to this, the fund operated as a company, in 1929 was only when it emerged in the CEF structure.

The fund had also previously been known as The Adams Express Company. This was prior to 2015, this change was put into effect to “accurately reflect what we off to investors today.”

ADX has an investment objective of “long-term capital appreciation.” They intend to achieve this by “investing primarily in large U.S. companies.” They go into a bit more depth by further explaining their “distinguishing characteristics.” This is found on the fund’s fact sheet:

Internally managed closed-end equity fund with exposure to a broadlydiversified, sector-neutral, large-cap equity portfolio. Committed to an annual distribution rate of at least 6%

They also seek to “deliver superior returns over time by investing in a broadly diversified equity portfolio.” This does seem quite obvious that they would intend to deliver superior returns as this is most funds objective. In the case of ADX, I believe the SPDR S&P 500 ETF (SPY) is the most appropriate benchmark here. In this case, they have beaten the SPY on several time frames but have also lagged.

The fund also doesn’t utilize any leverage or options strategy. This does leave quite the plain equity fund leftover. There are several funds that can fit this description, but I believe ADX does do a respectable job. The large year-end special could be viewed as a nice year-end bonus for income investors. Though an investor looking at this fund certainly shouldn’t expect anything fancy or for the fund to ever ‘blow away’ performance relative to their benchmark.

ADX has a low expense ratio of 0.74%. The fund is also quite a significant size at $1.59 billion in assets. One of the other boasts they have is “80+ years of distributions.”

Speaking of performance, this fund carries an almost permanent discount. I would primarily see this being largely due to the meager distribution relative to other funds. Also, the simple fact that they don’t offer any ‘bells and whistles,’ as we discussed with no leverage or options strategy. 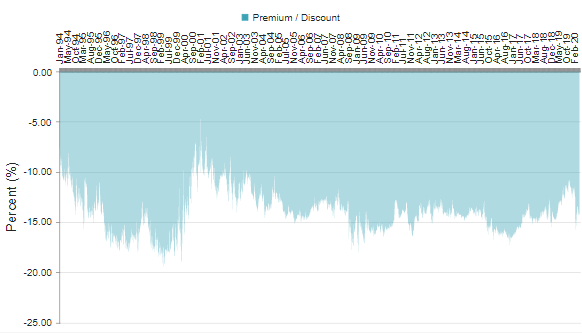 The fund’s latest discount of 14.23% though is wider than the latest year. That is putting the fund’s 1-year z-score at -1.31. This would indicate that the fund is relatively undervalued relative to this time frame. However, one might note that the longer-term 5-year period is at an average discount of 14.52%. In that case, the fund isn’t significantly cheap relative to its longer-term.

Unfortunately, there is no lifetime chart available for the fund. It certainly would have been interesting to see how the fund performed all the way back to 1929. This would have included many significant world events since then. It could have given us a gauge of where we are at now. Of course, this would be in relation to Covid-19 and recent riots in the U.S. breaking out. Getting a glimpse at how this fund reacted could have been helpful.

With the history that is shown though, the fund seems to remain at its persistent discount. The only time it really started to narrow its discount was in the dotcom bubble.

Since the fund is a plain equity fund, the appropriate benchmark is the S&P 500 or the invisible ETF, SPY.

Luckily, they made the performance easy with a snapshot in their fact sheet.

Again here, it would have been incredibly useful, and just plain interesting, to see the performance since inception. Although with Ycharts, we are able to go back to when SPY was incepted. 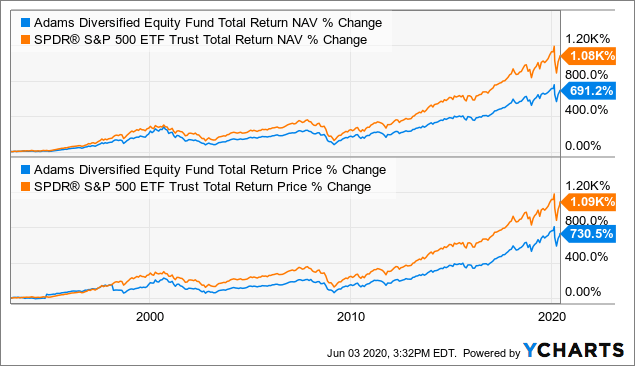 The SPY was incepted in 1993. So fortunately for us, that is a significant amount of time we are able to go back. In this case, we see less than desirable results with a significant underperformance from ADX on a total NAV and total price return basis.

With that being said, we are still looking at a fund that pays significantly more on average than the SPY would payout. So while it is meager relative to many CEFs in general, it can still be viewed as more of an income focus relative to SPY.

So just how ‘meager’ is their payout? Well, they currently pay a quarterly distribution in the amount of $0.05 per share. On that basis, the distribution rate comes in at 1.34%. However, they target a minimum distribution payout for the year at 6%.

What this means is that they offer a large year-end special distribution that puts them at this amount. And actually, it is generally exceeding that amount. For instance, in 2019, they show a 9.6% distribution rate for the year. How they calculated this was “total dividends and capital gain distributions divided by the average month-end market price of the Fund’s common stock for the twelve months ended October 31st.”

Last year’s amount was $1.27 per share. This was actually lower than the prior year, but as we will see, it was still higher than most years going all the way back to 2001.

One also might be interested in the fact that the fund has maintained that same $0.05 per quarter since 2003. Prior to that, and as far back as this chart goes, the fund had been paying a quarterly rate of $0.08.

What we typically see from an equity fund is that a significant portion of their distribution is classified as coming from capital gains. This is certainly the case for ADX. In fact, I believe this should be even more evident by how they manage their distribution payouts with the large year-end payment.

From their Annual Report, the following were the tax breakdowns;

So this is truly a fund to not expect large quarterly payments, which we have come to expect from most CEFs. Looking at this fund as more of year-end bonus money might be more appropriate.

As the fund stated, they invest primarily in U.S. large-cap stocks. Currently, the fund holds 97% in the U.S. For the period ending March 31st, they held a significant amount of tech, at 25.4%. This is very much reflecting a composition similar to its benchmark. SPY actually has 26.15% of its exposure to tech as of June 2nd, 2020. This was helped as we saw a selloff this year, with tech and healthcare leading the rebound higher – or some in those sectors not even taking quite the same drawdown as the broader market witnessed. 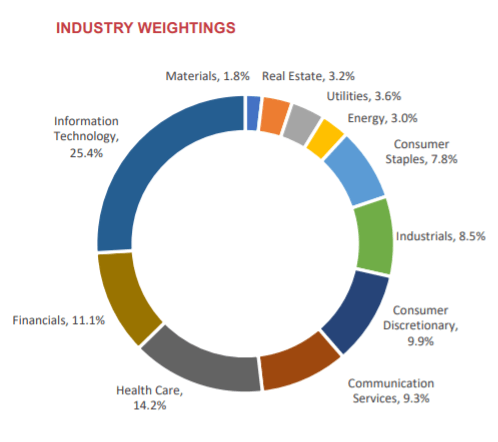 This is quite similar to SPY going across the board. 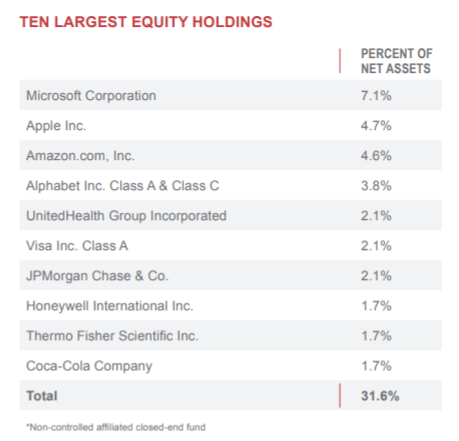 With that being said, what might be quite interesting is that the fund could be seen as a ‘closet index.’ Essentially a fund that is saying they are creating value by actively managing but in reality is just mirroring an index. In this case though, one might be interested to know that I don’t necessarily believe that is the case. The top several positions are all the same as what SPY is holding. However, they are holding different allocations. Additionally, ADX holds only 95 positions. As we know, SPY holds 505 holdings. This is due to several companies within the S&P 500 having multiple classes of stock.

Of course, Microsoft (MSFT), Apple (AAPL), Amazon (AMZN) and Alphabet (GOOG) (GOOGL) have been all absolute winners this year as tech plays. They have been winners for years too. The biggest ‘loser’ of this group on a YTD basis would be GOOG. Coming in at a lowly return of only 7.33%. 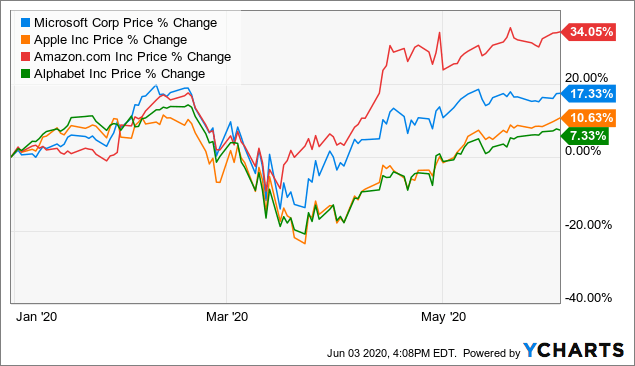 However, since the S&P 500 is still negative on a YTD basis, that certainly isn’t a terrible place to be of returning only a single digit. Impressively though, even the S&P 500 has come along way from the lows we saw in March!

After taking a look at the fund’s portfolio, we can ascertain that the fund isn’t value-driven. The portfolio is very much growth-oriented with the types of holdings that we see. I also don’t believe the fund is a closet index even though it might appear like it on an initial glance.

ADX certainly isn’t a fancy fund that will have income investors running to it. That would be primarily due to its much lower distribution rate than is typical with CEFs. However, the fund does usually provide a significant year-end special distribution that could be seen as a big bonus for holders of the fund. The fund has also been around for an incredible amount of time, being incepted in 1929 as a CEF. For investors looking for longevity in their funds, this one certainly could fit that bill.

SPY is the best benchmark for the fund. In that regard, the fund has been able to slightly beat over the shorter-time frames. The fund even put up a respectable performance on a 10-year basis. However, over the long-term (since the inception of SPY in 1993) ADX has lagged quite a bit. With that being said, in the end, the fund is still paying out significantly more than SPY if we annualize the numbers with their large year-end payments. So it isn’t necessarily just a growth fund either. That is where an investor will have to choose that large annual payout or total return. That is historically speaking too, it doesn’t mean the fund will underperform the same exact way that it had previously.

Disclosure: I am/we are long ADX, MSFT. I wrote this article myself, and it expresses my own opinions. I am not receiving compensation for it (other than from Seeking Alpha). I have no business relationship with any company whose stock is mentioned in this article.

Additional disclosure: This article was originally published to members of the CEF/ETF Income Laboratory on June 3rd, 2020.