The Covid-19 pandemic has proved to be a boon for Activision Blizzard (NASDAQ:ATVI). Demand for gaming content has sky-rocketed against the backdrop of shelter-at-home restrictions. Share prices of this gaming company are up 45.49% YTD.

Activision Blizzard has been a compelling story and has consistently given higher returns to shareholders as compared to the U.S. entertainment industry or even the overall market in the last one year as well as in the last five years. This seems even more exceptional considering that its earnings growth rate has lagged that of industry and market for most of its history.

Investors are highly impressed with Activision Blizzard’s solid product portfolio, robust business model, and diversified customer base. The only drawback is current valuation seems a tad bit pricey. Hence, this stock seems more suitable for retail investors with above-average risk appetite and time frame of at least one year.

Activision Blizzard has come a long way from being a struggling video games company called Mediagenic in the ’80s to the widely successful online gaming player it is today. The company now has a broad and diverse player base of over 400 million players, with over 100 million in each of its operating geographies of EMEA, Asia Pacific, and Americas. The company’s flagship games are the Call of Duty, Candy Crush, and World of Warcraft franchises. Activision currently accounts for about 8.31% market share in the gaming industry.

CEO Bobby Kotick has been the founder and the visionary for Activision. It is always a big plus for investors when the founding member is still actively involved in the company’s operations, as it ensures that the vision remains mostly intact.

Bobby purchased the then loss-making video game company Mediagenic with help of some investors in 1990 and renamed it Activision. Activision then acquired multiple video game studios in the late ’90s. In 2007, Activision merged with Vivendi to gain access to World of Warcraft, which was then the #1 multi-player, online, role-playing game franchise in the world. The new company was renamed Activision Blizzard. This deal was pivotal in changing the company from being a video game console company to one having a strong presence in the online PC gaming market.

In 2015, Activision Blizzard was included in the S&P 500 index. In 2016, the company acquired King Digital to enter the mobile gaming space. The company has also entered the e-sports business and is expected to go big in this market in the coming years.

Lately, however, questions are being raised about the excessive compensation paid to Bobby Kotick. Despite this, I believe that the long-time CEO has been very proactive in recognizing new growth markets and effectively steering the company in that direction. At the same time, the CEO has also proved his mettle in managing the company during difficult times.

Bobby Kotick has also been a big fan of Warren Buffett and Charlie Munger. Having the top person who values good business fundamentals is always a big plus for investors.

According to Visual Capitalist, the size of the global gaming industry is expected to grow at a CAGR of 9% from $152 billion in 2019 to $196 billion in 2022. In this exploding industry, Activision’s core strength has been the huge brand loyalty of its key game franchises such as Call of Duty and Candy Crush. The company mainly earns from original game purchases as well as in-game purchases. These franchises can result in huge top-line growth, especially during the launch of sequels or additional content. The company has planned for multiple launches for sequels of its key game franchises in the second half of fiscal 2020. This may offset some impact of reduced user growth that is expected after the shelter-at-home measures are further relaxed.

Activision was smart to recognize this shift in consumption patterns away from PC gaming to more casual mobile gaming far early. The company has successfully positioned itself in the mobile gaming space with the acquisition of King Digital. Mobile games are mostly free to play. Hence, the company opts for in-game advertising and microtransactions to monetize these assets.

The revenue mix is favorable

Activision has a highly diversified revenue base. The company has a presence on multiple channels across 196 countries. In 2019, the company earned almost 54% of revenues from international markets.

The company also has high revenue visibility, considering the recurring nature of a significant portion of its revenues. In 2019, the company earned almost 70% of revenues from subscriptions and licensing, while only 30% were from product sales.

The business model is scalable

Activision’s operating model is also highly decentralized, with all of its studios having complete independence in operations, talent, and financial management. This has proved to be a lucrative strategy and has fostered the culture of innovation. This is definitely a commendable achievement for a big corporate organization. Besides, the business model is also highly scalable. It is pretty inexpensive for the company to add new users once the gaming platform has been developed and launched. This becomes evident when we see that only about 9,200 employees are working for a company with MAUs of more than 400 million. Further, almost 77% of its revenues are from digital channels. With sales increasingly shifting to the digital channels, the company will further save on its operating expenses.

For many years in the past, Activision strove to excel across various gaming platforms. However, in 2019, the company changed its strategy to essentially focus on what it could do the best. Subsequently, the company has increased its focus on allocating additional resources to the strongest franchises to unlock their complete growth potential.

In the second quarter, Activision Blizzard’s revenues of $2.08 billion rose 72.16% YoY and surpassed consensus estimates by $379.83 million. The company’s GAAP EPS of $0.75 was ahead of the consensus by $0.16, while non-GAAP EPS of $0.97 beat expectations by $0.28. You can check future revenue and earnings estimates for the company here.

We see that the company has handsomely beat its second-quarter guidance across all key financial metrics.

Activision’s MAUs (monthly active users) were 428 million at end of June 2020, much higher than the consensus expectation of 407 million. Although the company may lose some of the users as the economy opens up, many will prefer to return back to a known gaming platform in their free time. Covid-19 has definitely acquainted many users with the company’s gaming catalog, which can again prove to be a solid positive in the coming quarters. 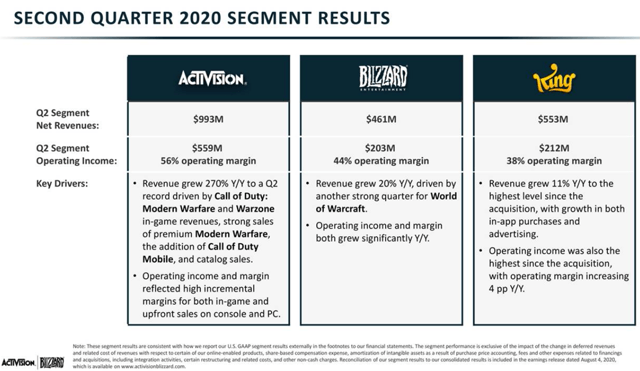 The above diagram highlights the segmental performance of the company. Call of Duty franchise has continued to be the key growth driver for the company, thanks to the solid reception for the recently launched Call of Duty Warzone game and Call of Duty mobile platform. Franchises such as World of Warcraft, Hearthstone, Overwatch, and Diablo are also proving quite successful. Candy Crush also proved to be a top-grossing franchise in U.S. app stores in the second quarter. Almost half of the company’s MAUs are on its mobile games. 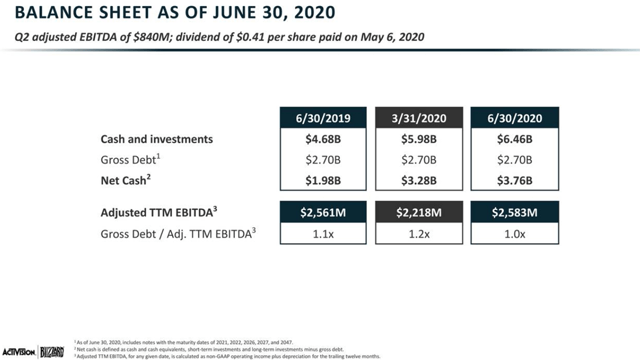 Activision also has a very strong balance sheet. The company has been consistently improving its cash while debt has remained constant. The company can completely pay off debt with its cash. 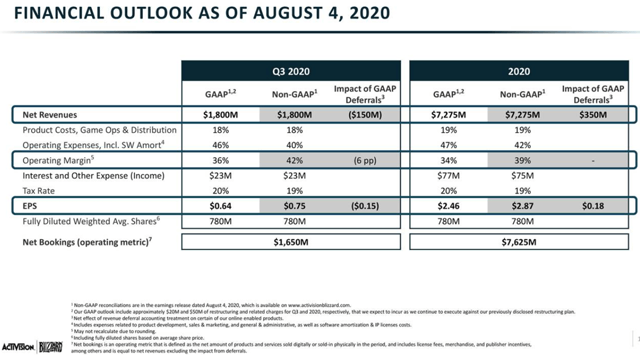 Activision has also provided a solid outlook for the third quarter of fiscal 2020 as well as full-year 2020, much above the analyst consensus estimates. However, the company is mostly known for its conservative guidance. Hence, this outlook is definitely bolstering investor confidence.

On August 5, Activision launched senior unsecured notes in two series worth $2.0 billion. Although the market was unimpressed, this is a smart move. The company is getting access to cheap capital at rock-bottom interest rates, which can be used for future growth or even for refinancing debt.

Investors should be aware of these risks

Listed below are a few of the risks retail investors should consider prior to investing in Activision Blizzard. 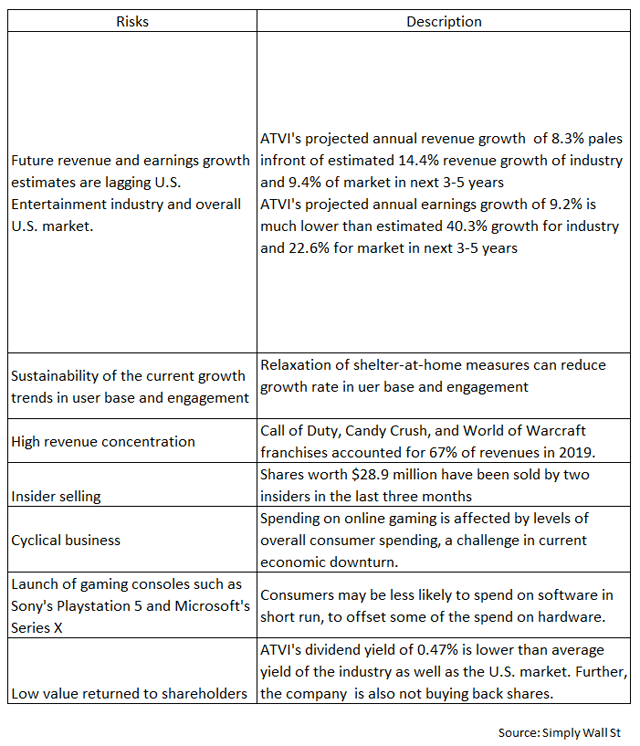 What price is right here?

According to Finviz, the 12-month consensus target price is $83.93, 2.91% lower than the last closing price. The majority of analysts have upped their price targets for Activision Blizzard after its second-quarter earnings release.

There is no denying that the company is bound to benefit from digitization wave that has taken on the world. Also, the launch of new hardware consoles from Sony and Microsoft is net positive for Activision. Device manufacturers generally equip their newer devices with extra hardware capabilities to handle software upgrades. This, in turn, proves to be a motivation for gaming software players to further up their game. Also, with people having to limit their outdoor activities for a significant time period, we can expect a more permanent change in consumer behavior in terms of entertainment and consumption patterns.

Despite all these pros, the stock is pretty risky during economic downturns especially when we consider the discretionary nature of the company’s offerings. The valuation multiples with PE multiple of 41.72x, a forward PE of 27.68x, PS multiple of 9.96, and PB multiple of 4.98x seem expensive. The PEG ratio of 1.92x and the dividend-adjusted PEG ratio of 1.88x are also significantly high.

So my overall take on the stock – I like the stock but find it pretty risky considering the inherent cyclicality of the gaming industry. However, the company is definitely attractive in the long run, and retail investors with above-average risk appetite should consider starting with a small position in this stock.