Tesla (TSLA) shares have nearly doubled in 2020, much to the delight of shareholders and to the horror of short-sellers.

Tesla’s initial gains were due to a perceived improvement in the company’s prospects, followed by a short squeeze brought on by the positive earnings report on January 29th. A little less than 20 percent of Tesla’s floating shares were sold short as of the last report in late January, which roughly corresponds to the 99th percentile for short interest for US-listed equities. If you’re a Tesla shareholder, the high short interest combined with the run-up in shares is likely not news to you.

However, what you might find useful is academic research on the market dynamics behind short squeezes and the underlying patterns in such stocks, which can help us make educated guesses about the future movement of Tesla shares.

A well-done and trader-oriented paper done by Peking University and Florida State University focuses on price action before and after short squeezes. Another interesting way to understand short squeezes is to look at case studies, like Porsche’s (OTCPK:POAHF) infamous cornering of the market for Volkswagen (VLKAY) stock in 2008. Finally, a well-known paper from MIT found that heavily-shorted stocks tend to have poor returns going forward, with a few dramatic exceptions. We’ll focus mainly on data from the first paper in this article.

Here’s what the research has to say about short squeezes (from the Peking University/Florida State paper):

In plain English, this means that when stocks surge from short squeezes, as defined by when a sharp price increase occurs in a heavily-shorted stock, you typically see a reversal in the stock over the following days and weeks.

If you dig into the data, you’ll find that in the ~3 months following a short squeeze, stocks typically give back around half to two-thirds of the gain from the short squeeze relative to the broad market return. The typical short squeeze begins after a positive catalyst (earnings, financing, M&A in some cases, etc.), and sends the stock up ~20 percent in 1-2 days and then down ~10 percent in the next 3 months after.

In this graph below, the dotted line represents the control group, which are stocks that have low short interest and experience strong increases. The dark line is the stocks that fit the definition of a short squeeze, meaning they have strong (15+ percent) previous day returns and heavy short interest.

As you can see, heavily-shorted stocks tend to go down after experiencing short squeezes, while the control group does not see the same degree of mean reversion.

Obviously, some squeezes are larger than others. The researchers found that the larger the short squeeze, the larger the ensuing mean reversion (think Beyond Meat (NASDAQ:BYND)) Note that short squeezes don’t necessarily have to only last 1-2 days and can actually last longer, depending on the market dynamics of a given stock. However, since short squeezes are caused by forced (and temporary) demand for the stock, they behave in somewhat predictable patterns, i.e. overreaction to positive news, and rarely last longer than a couple of weeks.

If Tesla gives back half of the gain from the short squeeze, this implies a price target for the stock of around $650. 2/3rds of the short squeeze implies an equilibrium price in the high $500s. Tesla might not be an average case, however, because of the magnitude of the short squeeze and the sheer number of Robinhood investors that rushed in on momentum – the net change in Robinhood accounts that held TSLA after the short squeeze started was ~13,700. Account for a few other popular retail brokerages and you have a phenomenon!

The reason why these patterns exist and are somewhat predictable is that the price for stocks is set in the short run by pure supply and demand and in the long run by the earnings of the underlying business. In the words of Benjamin Graham:

“In the short run, the market is a voting machine but in the long run, it is a weighing machine.”

Short squeezes, stock recalls, and similar trading action creates forced buyers, which obviously affect the short-run supply and demand for stocks. When you add retail momentum traders who will dump stocks at a moment’s notice, you get prime conditions for mean reversion. This is an intuitive and direct argument against market efficiency in the short run.

For a classic case study of a short squeeze, look at the Volkswagen/Porsche corner in 2008. 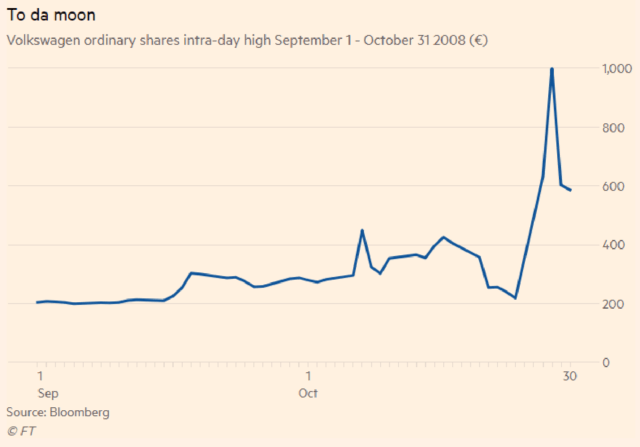 It’s not shown directly on this graph, but Volkswagen ended up giving back all of the gains from the short squeeze in the following weeks as the forced buying abated (Porsche was unable to close the deal). The German government was thought to be involved in some capacity to protect the interests of VW, which could have seen its coffers emptied if Porsche assumed control of the company. In a twist of fate, Volkswagen ended up taking control of Porsche in May 2009, helped by the German government and financing from the emir of Qatar. While it’s the classic case study of a short squeeze, the Porsche/VW saga occurred during a time of extreme stress in the financial markets, so it’s somewhat difficult to extrapolate the results of the short squeeze to the present. However, the research shows that short squeezes happen fairly frequently, and more often than not after the dust settles, the stocks trade down.

Based on my review of the literature on short squeezes, I believe Tesla will again trade around $500 sometime in the next few months, based on an above-average mean reversion in Tesla from the post-short squeeze pullback and the flushing out of the Robinhood crowd. While it isn’t certain that Tesla will give back its recent gains, the price action since peaking at over $950, the academic research on other short squeezes, and my gut feeling tell me that the short-run price increases are overdone, at least as far as the next few months are concerned. I wouldn’t advise shorting Tesla but would consider taking some profits if you are long, with the eye towards buying shares back cheaper at a later date.

Did you enjoy this article? Follow me for future research updates!