Of course, investors should not think politically. If you believe politically, you believe emotionally. Who invests emotionally – loses. But, on the other hand, there are facts and data. Election campaigns are such facts, and share price developments are also a fact. So, let us now combine these two points. I have selected three companies for you, which, in my opinion, have a certain potential or are undervalued. Twitter (NYSE:TWTR), Oracle (NYSE:ORCL), and Caterpillar (NYSE:CAT) are companies where I see double-digit upside potential, and the re-election of President Trump could release this potential.

The relationship between the microblogging/social networking service Twitter and President Trump is ambivalent. For the president, it is one of the most important platforms for direct communication. Conversely, he has already threatened Twitter with heavy regulation. The company’s share price has risen sharply since Trump’s election and has more than doubled, even though Twitter has not increased its revenues since November 2018. In 2020, they have even fallen.

Operationally, however, Twitter is always quite volatile. Recently, however, the company was able to show that the business is capable of being profitable. For example, Twitter was able to achieve an EPS of USD 1.56 in 2018. In 2019, EPS was even USD 1.87. However, EPS is expected to decline again in 2020. Twitter naturally suffered greatly from the collapse in advertising revenues during the corona pandemic. In the second quarter, advertising revenues fell by 23 percent. However, these figures should improve in the future. By 2021, Twitter could already be making a small profit again. Cash flow and sales should increase too.

Taking this development into account, Twitter is currently strongly undervalued and has high upside potential. The re-election of Trump could unlock this potential. President Trump will continue to use Twitter heavily in the future. If he remains president, Twitter will continue to attract public attention, making it easier to get companies to use Twitter as an advertising platform. That Twitter will reach the expectations is at least more likely if Donald Trump wins the election. Let’s look at the upside potential: Based on the last few years’ cash flow, the upside potential is over 60 percent by the end of 2021 (share price USD 78).

Although the volatile cash flow development slightly distorts the calculation, Twitter is not that overvalued than its competitors in terms of revenues price that there is no more room for stretching.

The second stock that might jump in the event of a Trump re-election is Oracle. Not only has the company some upside potential to is fair value. Oracle founder Larry Ellison is also one of the supporters of President Trump. The current CEO of Oracle, Safra Catz, also served on the Executive Committee to prepare for the presidential transition in 2016. This sympathy had no adverse effects on the share price (at least as far as we know). Since the election of Donald Trump, the share price has risen by more than 55 percent.

With the planned TikTok acquisition, Oracle has already benefited massively from the goodwill of President Trump. Together with Walmart (WMT), both companies will take up to 20 percent of the new company. Operationally, things have been somewhat mixed for Oracle in recent years. Especially, the growth in sales is rather disappointing. From USD 35.6 billion in 2011, Oracle increased sales to just USD 39.5 billion by 2019. Above all, do not be deceived by the high EPS, as this is mainly due to the purchase of shares. For example, Oracle has reduced the number of outstanding shares from 5.1 million (2011) to currently 3.1 million, thus artificially increasing the cash flow and profit attributable to shareholders. If we look at the absolute figure, the result (as with revenue) is rather sobering.

Nevertheless, it would help if you did not forget that an increased profit per share still increases the individual share’s value. In this context, it does not matter whether this growth is achieved through share buybacks or organic growth. Besides, Oracle announced already in the middle of the corona crisis in May that it planned to buy back a further bundle of its shares worth 15 billion US dollars. Against this background, we have some upside potential if we take a two-year horizon. Based on historical multiples (adjusted P/E ratio in particular), Oracle’s fair value could be 20 percent above the current level by the end of 2022. 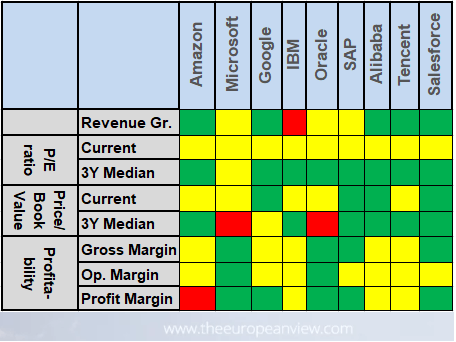 As with Twitter, there is a good chance that investors will raise the Oracle stock to a higher level, which could anticipate the fair value of 2022 and would in a 20 percent gain. Trump’s goodwill toward Oracle could make the company more immune to government regulation efforts. The company may also benefit from further intervention, as it did with the TikTok deal. Such fantasies could accordingly be catalysts for share price gains.

Another winner could be the Caterpillar. The share price has risen by almost 75 percent in recent years.

Investors hope for government investment programs here. Companies like Caterpillar are the primary beneficiaries of building a wall on the border with Mexico. But the wall is only one project. In June, Bloomberg reported that the Trump administration is preparing a nearly $1 trillion infrastructure program. Most of the money will be spent on traditional infrastructure works, such as roads and bridges.

While Caterpillar’s profit and cash flow have also slumped due to the corona crisis, the metrics should improve in the course of the next years, and additional infrastructure programs could be a tailwind. But also globally, governments could provide incentives to revive the economy. Caterpillar could also benefit from this. The re-election of the president and a rapid investment program could set the ball rolling. If we look at expected earnings and cash flow, the upside potential at fair value could be up to almost 30 percent by the end of 2022.

Buying shares in a company because of a specific event is more of a gamble and has little to do with serious investing. You should be aware of this or to speak with the words of Warren Buffett:

“The only reason for putting cash into any kind of investment now is because you expect to take cash out; not by selling it to somebody else because that’s just a game of who beats who.”

But as I said in the introduction, the re-election of Trump has consequences from which some companies could benefit. Thus, the political environment in which companies operate is a fact that should not be ignored. Twitter, Oracle, and Caterpillar are companies where I see double-digit upside potential that could be realized if Trump is re-elected.

Some companies named in this article are part of my diversified retirement portfolio. If you enjoyed this article and wish to receive other long-term investment proposals or updates on my latest portfolio research, click “Follow” next to my name at the top of this article, and check “Get email alerts”.

Disclosure: I am/we are long IBM, CAT. I wrote this article myself, and it expresses my own opinions. I am not receiving compensation for it (other than from Seeking Alpha). I have no business relationship with any company whose stock is mentioned in this article.

GBP price, Brexit news and analysis: GBP/USD looks to be stuck in a broad band between just under 1.33 and 1.3440 as the markets react to indications that the EU-UK talks on their relationship post-Brexit […]