Gold and silver have both been surging recently perhaps for different reasons. Gold safe haven demand has been up since the COVID inspired lockdowns increased deflationary pressures on world economies.

Silver tends to follow gold as a risk hedge, but had been lagging behind gold’s run from $1,190 dating back to late 2018’s market correction. It appears silver investors finally woke up and decided to participate in the market now that gold appears to have solidly reached a new plateau.

Gold’s price breakout from $1,580 in April is the more obvious of the two monetary metals, exhibiting a bullish flag pattern dating back to the beginning of April.

The low in gold’s price coincided with the introduction in the States of the coronavirus lockdowns in March. This began the flag pattern that lasted until mid-May, when gold finally got up and started to run. Gold recently retraced back to just over $1,720 and has appeared to find a new base at that level. Gold continues up over $15 on the day, at the time of this writing on May 19th.

I expect gold will retry precious highs around $1,760 until it finds continued support, with the next point of resistance being $1,785 which it tested twice in 2012. From there, it is onto $1,900 an ounce if the gold bull continues to run on current economic uncertainty.

Precious metals investors know well that silver bull markets typically follow gold ones. What is puzzling is that the latest leg of the gold bull market started in late 2018, and silver chose to break formation and test lows in the $14 range while gold soared. 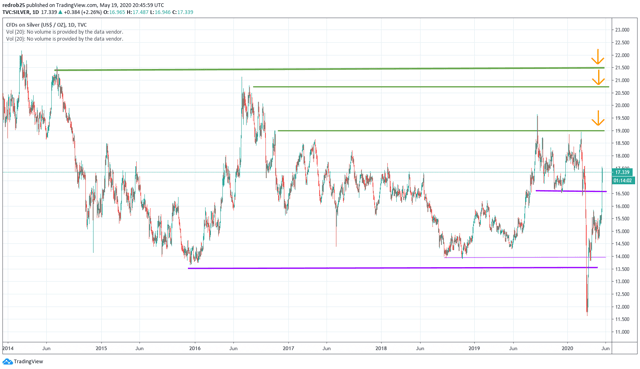 Well, finally, silver investors are starting to feel the love again with the latest jump back into the mid-$17 price range. Silver head faked to $19 last summer and then proceeded to range trade before diving down to the $11.50 per ounce range in Q1 of 2020.

With silver futures prices trading well below the $16.50 average cost of mining for silver primary producers, many market pundits were scratching their heads at the price action, waiting for a rebound to follow gold’s rise.

Now we may finally have it, with three short-term silver price targets noted on the chart. Silver has tested and popped through the two recent bottoms in the mid-$16.50s, noted once late last year and again in Q1 of 2020.

Upside momentum, given bulls’ continued strength and the continuation of partial US economic lockdowns, appears stronger than in recent years. It would not surprise me to see silver test its highs in 2015 and 2016 of over $20 per ounce.

If the bull continues, silver’s next major point of resistance is the $35 range last seen in 2012, 3 years after the peak of the last financial crisis. If the coronavirus has indeed popped the current bull market bubble, we could well see silver challenge the $44-$50 range from its peak in 2011. 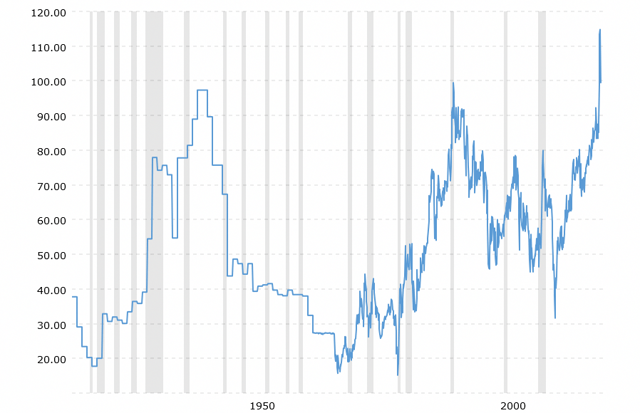 Being a gold investor since 2000 has been glorious, as it has out-returned all major stock market indices handily in that time frame. Silver has been more of a roller coaster ride, bouncing around from $5 an ounce in 2000, to $50 in 2011 and down to $11.50 this year.

Silver investors have a right to be wary of holding the metal for any length of time, and expect volatility in the price stemming from both industrial demand and the increased potential for financial market chaos. But those investors are often very handsomely rewarded for their wait.

The gold to silver ratio peaked at 114 in April of this year, as shown in the MacroTrends chart above. Mean reversions of this ratio point to a potential bottom of about 20 to 1. And this is with a massive gold bull market going on amidst trillions of debt leverage that keeps growing around the world as deflation sets in.

I don’t see silver retesting old lows any time soon. If the gold-silver ratio mean reverts to old levels, what price would silver have to reach then? Assuming gold stops at $1,900 when economic chaos finally peaks, the reversion price of silver would be $95. That would put some smiles on the faces of silver investors after a long and patient waiting period.

US Dollar Index, DXY, S&P 500, US Jobless Claims, EU Open – Talking Points: US Jobless Claims will be intently watched in the upcoming session and may fuel risk aversion should the number of claims […]