As expected, OPEC+ Russia and its alliance partners of 10 countries agreed to meaningful production cuts to shore up an oversupplied market caused by significant demand destruction from the novel coronavirus’s spread across the globe. Thirty million barrels per day (bpd) of oil are expected to be wiped from demand the month of April. The OPEC General Secretary Mohammed Barkindo suggested that an estimated 12 million bpd of potential reduced consumption, maybe more, could be expected in the second quarter.

Recently, the Texas Railroad Commission, the body which oversees oil and gas exploration and production of the largest producing state, was lobbied by Pioneer Natural Resources (NYSE:PXD) and Parsley Energy (NYSE:PE) to curb output. Interestingly, Exxon Mobil (NYSE:XOM) has not signed on for the production curbs. They, alongside the Trump administration, expect to allow market forces to moderate production. By the end of the business day, Thursday, April 9, WTI futures were down about 7.5% for a price of $23.19. The Wall Street Journal writes at the end of the trading day in the U.S:

One could argue that had Saudi Arabia and Russia not been in conflict and agreed initially on cuts, prices might be slightly higher. However, more pain spread worldwide, both in health terms and economically, was required to bring them back to the negotiating table. The facts and consequences are now undeniable.

Only Occidental Petroleum (NYSE:OXY) was given any gains for the day. 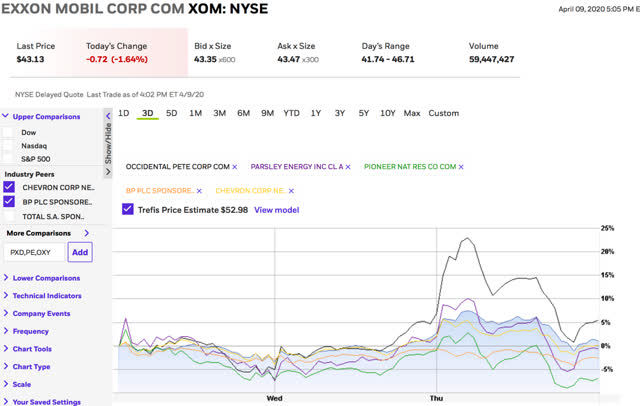 On the flip side, pent-up demand exists for U.S. drivers in the coming weeks and months. Some of that demand will be offset by those who have lost jobs and need to economize. Still, gasoline is quite inexpensive.

Something noteworthy, air pollution has reduced from the dramatic reduction in transportation and other economic activities. The signs are being noticed across the globe. In India, “government data has shown that India’s capital New Delhi has seen a 71 percent plunge of the harmful microscopic particulate matter, or PM 2.5.,” notes an article. Himalayan mountain peaks are being seen from afar for the first time in people’s lives. There will likely be new discussions surrounding what this pandemic means for sustainability going forward.

A great reset or re-thinking is upon us – even beyond obvious impacts to sectors heavily impacted by the dominoes dropped in COVID-19’s wake. The investment implications will slowly emerge. A new peak in oil demand may be on the horizon sooner than previously thought.

Disclosure: I am/we are long XOM, OXY. I wrote this article myself, and it expresses my own opinions. I am not receiving compensation for it (other than from Seeking Alpha). I have no business relationship with any company whose stock is mentioned in this article.