It seems that fear is slowly starting to creep back into the market as a risk-off trade appears to be building. Falling yields, rising credit spreads, and gold all seem to suggest there is some nervousness among investors beneath the surface.

Equities certainly haven’t been immune to these worries, with the S&P 500 about 5% off its recent June highs. Still, for the most part, stocks have been relatively resilient, giving very little back, if anything, from the big rebound since the end of March.

The spread between the 10-Year Treasury yield and the dividend yield of the High Yield ETF (HYG) had primarily been moving in the same direction since the middle of March. In the chart below, the dividend yield of HYG is used to represent the yield on the HYG ETF. In fact, until the beginning of June, the spread between these two rates had been converging. But since June 8, they have once again started to widen. It could be nothing, or it could be the sign of a risk that is now starting to get priced into the market.

It isn’t only in the credit spreads that we can see risk and potential fear building. Gold has been consolidating for some time, and just recently, it has shown signs of starting to advance again. The metal had been trading sideways from the middle of April until the middle of June. However, on June 22, gold began to advance, rising to its highest levels since 2012. 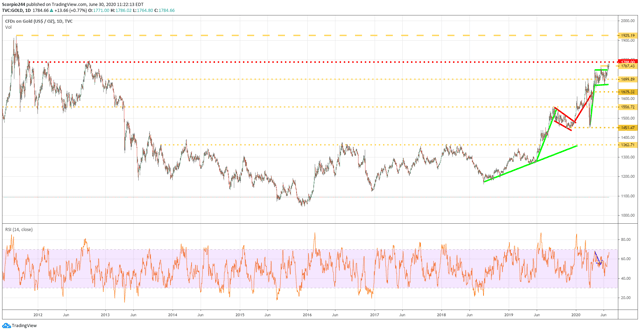 While some investors may believe that the recent rise in gold has to with inflation concerns from the printing of money, we learn from the velocity of MZM that without output growth, the creation of money acts a disinflationary force on the economy. It would, therefore, suggest that the recent rise in gold has nothing at all with inflation but instead growing fears and a safe haven.

Based on the current growth in MZM and the decline in GDP (output), we should see a further decline in the velocity of MZM in future quarters. The chart below shows how the growth in MZM has largely outpaced that of the output over decades, and that has created this downward path on money velocity.

Additionally, rates on the 10-year yield are trading around a level of technical support at 64 bps. It’s a significant level because if it falls below support it could be a signal that lower interest rates lie ahead. Again, the decline in rates also is a potential sign that confirms the notation that investors are expecting lower inflation rates in the future, supporting the notion that gold is rising out of fear, not because inflation is on is forecast to be on the rise. 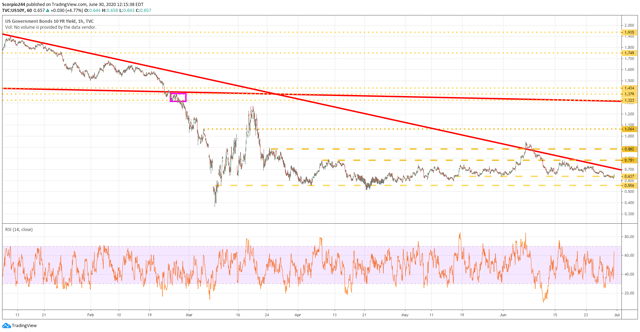 In yet another indication that it’s fear that’s creeping into the markets, US rates have been falling faster than rates around the globe. The spread between US and German yields are once again falling to the lower end of their recent trading range. Typically we see this type of activity when there is a flight to safety among investors. 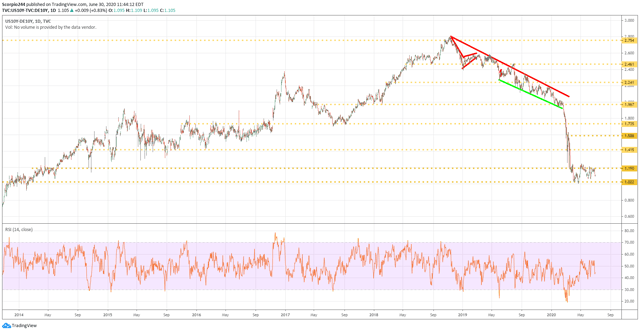 Worries Over The Economy?

It could very well be that investors are growing uncertain about the current state of the US economy, as coronavirus cases surge across the US and states reverse some of their recent reopenings. Should reopenings slow or, worse reverse, it would jeopardize the economic recovery that has been taking place. It also would likely suggest the second-half rebound many investors have been betting on either doesn’t take place or is much slower than current beliefs. That could result in a reset of the earnings rebound, which is currently projecting a V-shaped recovery.

A slower recovery could either reduce the rebound in earnings or lengthen the time it takes to get that rebound. That would likely result in a repricing of equities.

With all these potential risks on the table, it’s no wonder why investors are preparing themselves for a risk-off event.

With more than 150 members, Reading the Markets is one of the fastest-growing services on SA Marketplace. Membership has surged by over 40%, just this year. We focus on using fundamentals, technical, and options market analysis to search for a clue on the directions of markets, sectors, and stocks.

I use videos, audio, and written commentaries to get the story out.

Hope to see you soon

Additional disclosure: Mott Capital Management, LLC is a registered investment adviser. Information presented is for educational purposes only and does not intend to make an offer or solicitation for the sale or purchase of any specific securities, investments, or investment strategies. Investments involve risk and, unless otherwise stated, are not guaranteed. Be sure to first consult with a qualified financial adviser and/or tax professional before implementing any strategy discussed herein. Upon request, the advisor will provide a list of all recommendations made during the past twelve months. Past performance is not indicative of future results.