As is typically the case, mid-cap stocks produced a 3Q total return between the performance of the small and large cap cohorts. In the 3rd quarter, the S&P Midcap 400 (MDY), produced a +4.8% return, besting the S&P Smallcap 600 (IJR) at +3.2%, but lagging the large cap S&P 500 (SPY), which returned +8.9%. Likewise, the worst 50 mid-cap stocks lost around 20% on average in the third quarter, besting the 50 worst small-cap stocks, which were down roughly 30%, but trailing the 50 worst large-cap stocks, which lost about 17%.

In the table below, I have listed the 50 worst performing S&P Midcap 400 constituents over the third quarter of 2020. 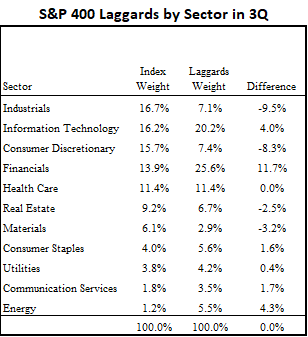 I hope this list of midcap market laggards is an insightful view for Seeking Alpha readers. As the cyclical rebound broadens, I do expect mid-caps and small-caps to ultimately play catch-up. For those bottom-fishing on this laggards list, you should focus on businesses that have the capacity to generate cash flow and service their debts. Those companies will survive, and benefit from the ultimate recovery that should power these more economically-sensitive stocks higher. While we have seen returns tied to capitalization levels, we could briefly see mid-caps gain leadership as breadth expands from the large-caps before reaching down into the small-cap universe.

Disclaimer: My articles may contain statements and projections that are forward-looking in nature, and therefore inherently subject to numerous risks, uncertainties and assumptions. While my articles focus on generating long-term risk-adjusted returns, investment decisions necessarily involve the risk of loss of principal. Individual investor circumstances vary significantly, and information gleaned from my articles should be applied to your own unique investment situation, objectives, risk tolerance and investment horizon.

Disclosure: I am/we are long MDY,IJR,SPY. I wrote this article myself, and it expresses my own opinions. I am not receiving compensation for it (other than from Seeking Alpha). I have no business relationship with any company whose stock is mentioned in this article.

USDJPY Price, News and Analysis: US dollar basket below 93.00. USDJPY heads lower as support breaks. IG client sentiment is mixed. The US dollar continues to leak lower and the dollar basket (DXY) is now […]