In the previous article, Splendid Exchange provided an overview of 28 global currencies. Specifically, I looked at their valuations relative to one another and suggested three trading opportunities. In this article, I would like to go into the details and list four reasons to short the British pound – specifically, against the Australian dollar (short GBP/AUD).

Reason One: Technical Set Up

GBPAUD is trading within an ascending channel, which is a bullish pattern. However, the pair is approaching the upper bound of that channel and is facing strong resistance in the 1.930-1.950 area. Already, the pair is struggling to break above 38.2% Fibo extension level (1.930) from July 29 low to Dec. 13 high. If the pair fails to break above this level, it is likely that it will start trading on a wave C (see the chart below) towards the lower bound of the ascending channel (near 1.8500). Furthermore, RSI is getting overbought and fundamentals are not in GBP’s favor (continue reading).

The British pound still bears the Brexit anxiety. Although the Brexit Withdrawal Bill (signed and approved by the Queen last week), ensures that the UK will leave the EU on January 31st, many questions remain unanswered.

U.S.-UK trade deal faces big hurdles. Sajid Javid, a Chancellor of the Exchequer, has insisted that Britain will proceed with a unilateral digital services tax, despite a U.S. threat to levy retaliatory tariffs on British-made autos. On the other hand, the EU has already warned the UK PM Boris Johnson that he will fail if he tries to use the leverage of a US trade deal to strike better terms with Brussels.

The UK government finds itself in a rather awkward position. While the UK-US trade talks will continue for months, the UK-EU trade deal must be done quickly because the EU, taken as a whole is the UK’s largest trading partner. In 2018, UK exports to the EU were £291 billion (45% of all UK exports).

In addition, UK must replicate all of the EU’s trade deals with other countries. So far, the UK has signed 20 “continuity” deals covering 50 countries or territories, but they account for a tiny share of UK’s exports and imports. 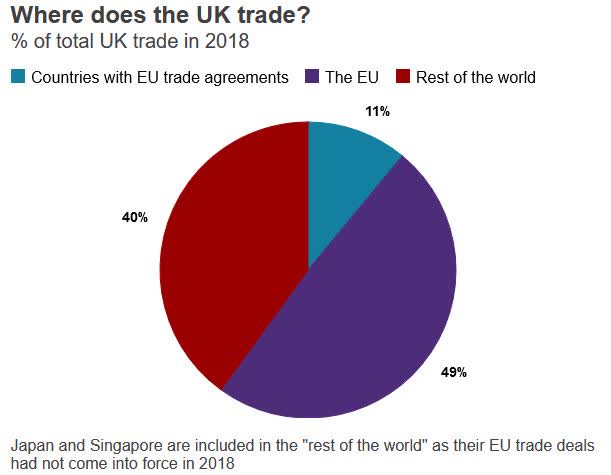 Conversely, Turkey, which is a a major market for the UK, won’t be ready to sing a deal before January 31st, because it is already in a customs union with the EU. A deal with Japan – which alone is worth over 2% of total UK trade – also won’t be ready.

Overall, reaching a meaningful deal with all the key states will be exceedingly difficult. Ongoing negotiations would be a constant source of unhealthy instability and speculation, which will ultimately result in forex volatility.

The chances for a 25bp rate cut by the BoE on Jan. 30 are rising. With global yields falling on China-related safe haven flows, the UK 2-10 spread has flattened considerably – from 26bps on Jan. 13 to 11.3bps on Jan. 27 (see the chart below)- following a spate of dour economic releases, in early January, that boosted rate cut odds. 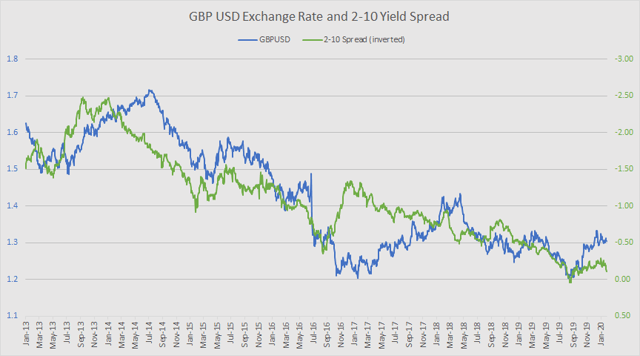 Inverting yield curve took traders to increase their bets on the likelihood that the Bank of England (BOE) will look at a rate cut. Bloomberg reported that investors now see a 70% chance of a rate cut on Jan. 30. 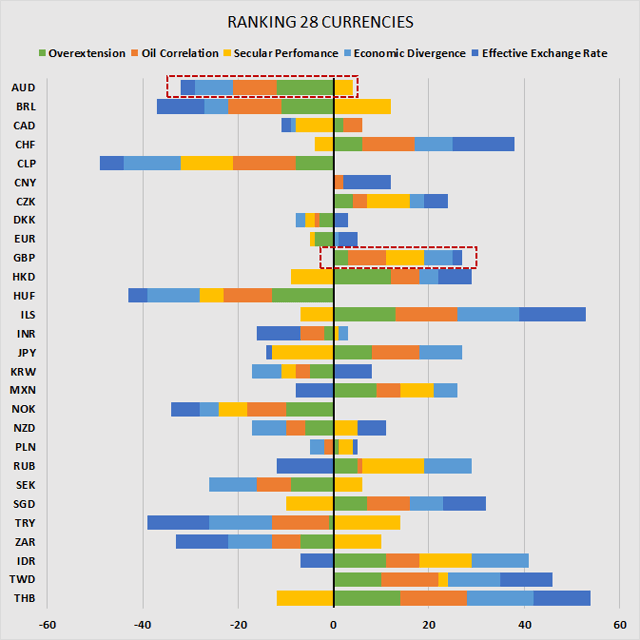 Indeed, a trader or investor should normally avoid the crowds and look for undervalued opportunities. “Long GBP” is currently the most “overcrowded” trade in the foreign exchange universe, while “long AUD” is one of the least overcrowded one (see the chart below). 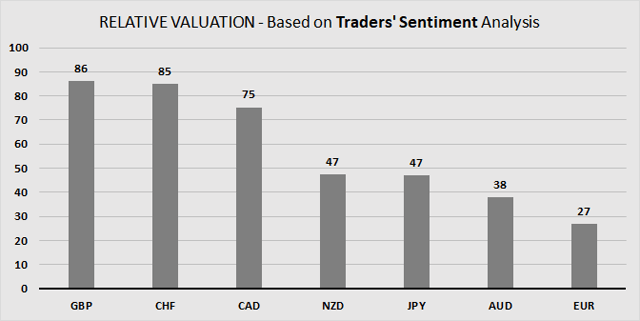 Technical picture for the GBPUSD is gradually turning bearish. Historically “expensive” exchange rate and a bearish divergence between the British pound and the yield spreads enhance the views of a limited upside for GBPUSD.

However, I would prefer to short GBP against that Australian dollar, because AUD is one of the most undervalued currencies in the forex market right now.