360 Finance, Inc. (QFIN) has just announced its Q2 results. The financial performance delivered by the company in Q2 is one the best since its IPO. The operating efficiency and profitability were largely improved, thanks to the technology-driven business strategy. Going forward, we believe QFIN will continue to improve its margin, making the stock a good bargain at current valuation. The acquisition of a commercial bank’s major shares will boost its long-term growth as well. We believe QFIN is a strong buy at this point. 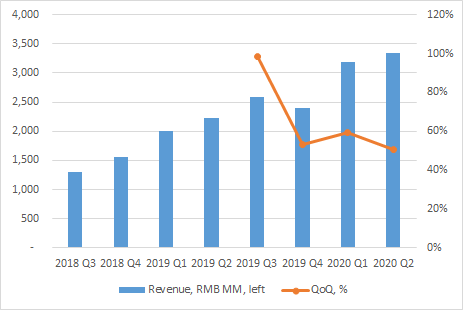 While the business growth maintained a high speed, the improvement in profitability is what should really be highlighted in Q2. Net Income grew over 40%, driving the Net Income Margin to over 26%, almost back to the level a year ago. Given the low-interest rate and strict regulatory environment, the performance is quite encouraging, especially when taken into consideration the COVID-19 shock to the economy. The reason behind this is what they called the “capital-light” model. 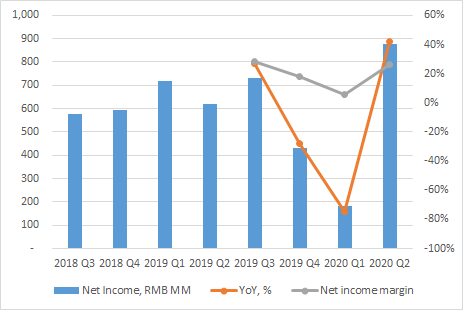 The Capital-Light Model Is Quite Promising

Starting from Q1 2020, QFIN started to report their “Loan origination volume under the capital-light model within Platform Services” in the quarterly earnings. This represents one of the strategic changes QFIN has been making, which was to shift from traditional lending to a more “capital-light” model. As part of this strategy, QFIN is also changing its legal name from “360 Finance, Inc.” to “360 DigiTech, Inc.“. This reminds me of a series of very similar name-changing events that happened to major Chinese Fin-tech companies. For example, JD Finance (a subsidiary of JD.com, NASDAQ: JD) has changed its name to JD Digital, and Ant Financial did something similar recently by changing its name to Ant Technology (reference). It seems that the emphasis on “technology” is becoming more and more popular within the Fin-tech industry.

We believe this is the correct direction to take, because:

So instead of fighting to be a gold digger, why not start selling them jeans?

The so-called “capital-light model” seems to be working well for QFIN. The percentage of outstanding loan balance under this model has been steadily growing to nearly 25% by Q2 2020: 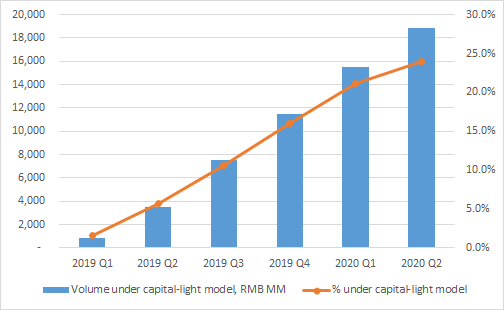 Under this model, QFIN’s operating efficiency and profitability is largely improved as the marginal cost of this technology-driven strategy is much lower than traditional lending. According to their Q2 release, QFIN has been applying leading data technology and risk management systems based on AI. This allows the company to gain efficiency in daily operations such as loan facilitation, product recommendations, as well as risk controls. As stated,

Revenue from these technology powered services amount to 48% of total net revenue.

Going forward, we believe that QFIN will continue to shift its focus on the technology side and the revenue from this “capital-light” model will continue to grow. This will help to drive up the profitability of the company fundamentally. We should not be evaluating QFIN as a finance company, but more like a tech stock.

But QFIN wants definitely more than just being a service provider, or on the “Tech” side. They have been making efforts in catching up on the “Fin” side as well. In Q2, they have announced the acquisition of a commercial bank in China and becoming the leading shareholder of that bank. This essentially means that QFIN “owns” a banking license in China, which changes the game for QFIN fundamentally:

Although we don’t know the price QFIN paid for the deal, it looks like a good strategic investment for the company.

As a financial service provider, QFIN’s business is always tied to China’s overall economic growth. Although it seems that China has successfully taken control of the COVID-19 outbreak, there is always a risk that a second wave will come, especially when China opens its border eventually. Although the materiality of the risk is high, the possibility would be quite low.

Another risk factor is regulatory compliance. Online / P2P lending are still under high scrutiny in China and will be facing regulatory uncertainties for a long time. For QFIN though, since it has “collected” all the major financial licenses in China, we believe this risk factor is less of a concern.

QFIN is trading now around 7-8x PE. This is a typical valuation for a traditional finance company, such as banks. However, as we have stated above, we believe QFIN should be valued more on the “Tech” side, as it has been shifting focus on the “capital-light” model, which will improve its margin fundamentally. Overall, we believe QFIN is a good target at the current share price.

Disclosure: I am/we are long QFIN. I wrote this article myself, and it expresses my own opinions. I am not receiving compensation for it (other than from Seeking Alpha). I have no business relationship with any company whose stock is mentioned in this article.

The recovery period across markets after the drawdown earlier in the year has hit its six-month anniversary. Investors who have taken advantage of the bounce-back may be looking to preserve their gains and tilt their […]