One of the strategies that we employ at CEF/ETF Income Laboratory is something that we have termed “compounding income on steroids,” which is a method that involves exploiting valuation inefficiencies in closed-end funds. Our CEF rotation strategy allows an investor to increase their share count growth in an income-generating position without DRIPing, i.e., receiving all their distributions in cash, in order to supercharge one’s income growth through “double compounding.” Our analyst, Nick Ackerman, recently modeled the effect that successful swap trades could have on an investor’s bottom line in “Income Lab Ideas: Reinvesting And Swap Trades Have A Huge Impact On Your Portfolio.”

While we frequently and successfully execute these swaps in our flagship model CEF portfolios, our more aggressive Tactical Income-100 portfolio (+31.86% in 2019) and our relatively conservative Income Generator portfolio (+30.87% in 2019), we do understand that many of our members may own funds that are not in our portfolios but may still interested to be alerted to when their holdings become overvalued in order to execute our “compounding income on steroids” strategy.

This is where our Weekly Closed-End Fund Roundup comes in (last public edition here). This report contains a wealth of data, including sector performance, distributions boosters and cutters, important CEF news and announcements, as well as a roundup of CEF articles from the broader Seeking Alpha community from the last week. In particular, what can be quite actionable are our list of top premium/discount gainers or losers from each week that allows members to quickly scan for funds that have become relatively overvalued or undervalued in order to execute swap trades. (These Weekly Roundups are released to the public about two weeks, however, only members get to see our commentary and recommendations on specific funds.)

For example, in our January 17, 2020 roundup that was just released to the public side, we recommended three “swap trades” based on the top premium/discount gainers list. Three weeks later, one of these have already played out, but two of the sell candidates are still overvalued. Don’t let mean reversion catch you out!

Cohen & Steers Select Preferred and Income Fund gained +5.10% in premium last week and sits at premium of +15.20% with a 1-year z-score of +2.3, indicating significant relative overvaluation. The valuation is the highest since inception in 2010! 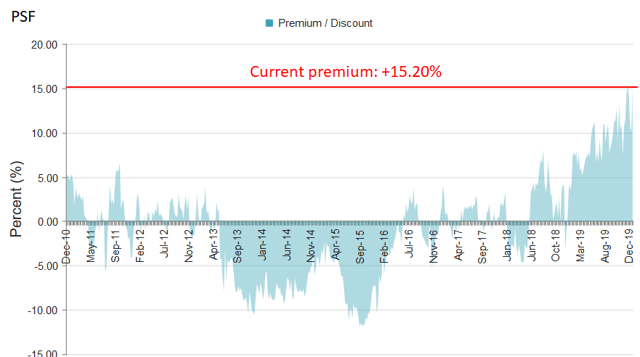 Therefore, PSF is an excellent sell candidate. It could be replaced by something like Flaherty & Crumrine Dynamic Preferred and Income Fund (DFP), which is available at a +0.55% premium (cheapest of the Flaherty & Crumrine funds). Even though DFP is nearly fully in preferreds while PSF has a mix of bonds, preferreds and convertibles, their NAV profiles have tracked each over very closely over the last several years. 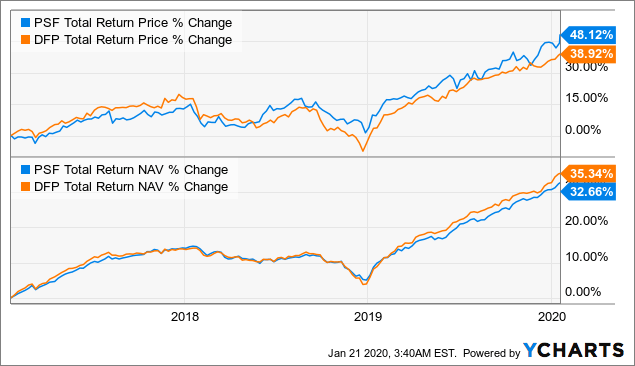 Fast forward three weeks later, and DFP has outperformed PSF by around 240 bps in 3 weeks, the equivalent of getting around 5 months’ worth of distributions from either fund “for free!”

However, PSF is still significantly overvalued, in my opinion, at its +15.10% premium, so the swap to DFP (+2.00% premium) still makes a lot of sense. 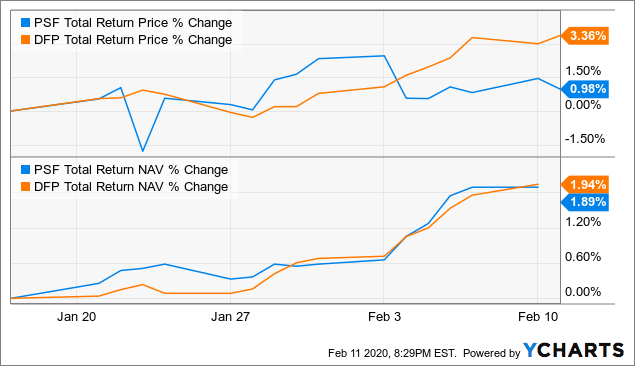 Another overvalued fund is MFS Special Value Trust, which gained +3.20% in premium last week and sits at a premium of +17.39% with a 1-year z-score of +2.1, indicating significant overvaluation. The premium is at a 5-year high. 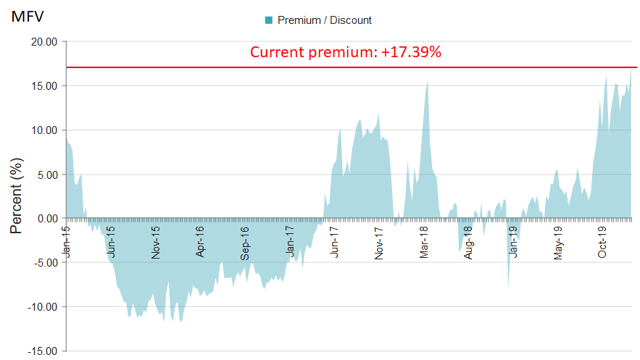 MFV is a balanced/hybrid fund that owns an approximately 40:60 stock-to-bond portfolio, which admittedly does make it hard to benchmark against peer CEFs. However, we can see that its NAV performance has not been particularly special versus the BlackRock 40/60 Target Allocation Fund (BIMPX). Hence, I do not think that the fund’s +17% premium is deserved. 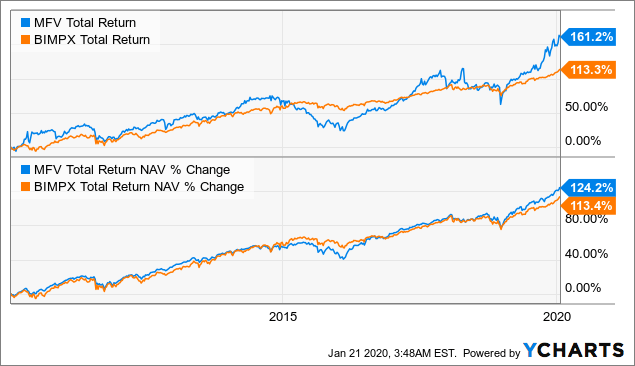 Fast forward three weeks later, and we can see that this trade suggestion has not yet played out at all. Even though MFV has underperformed BIMPX slightly at the NAV level, its price performance has continued to grind higher, as its premium has expanded by a further 5 points to +21.82%, which is around the highest since 2001! 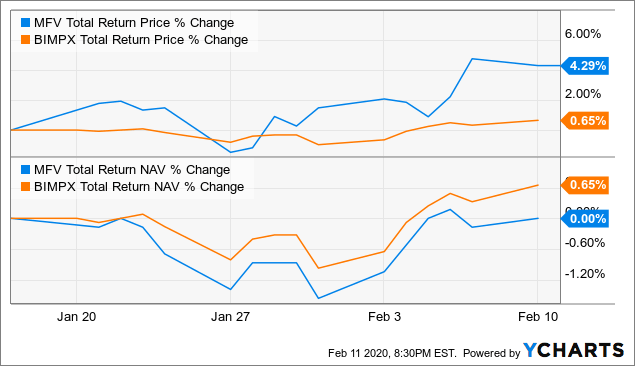 Hence, MFV’s premium is ripe for the picking. Congratulations to all those who have been long this fund! 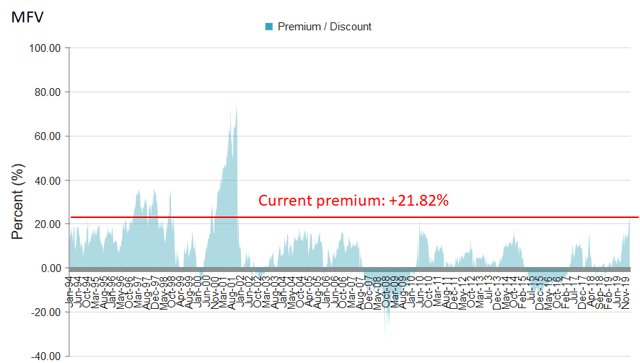 The final fund to consider replacing is Liberty All-Star Growth Fund, which +5.35% in premium last week and currently has a premium of +6.28% and a 1-year z-score of +2.1. While this premium isn’t as excessive as the previous two examples, have investors forgotten that a rights offering for ASG is currently on file? When the timing of the offering is announced, I expect the price to drop quite significantly (as discussed in a previous Weekly Roundup). One can always “hide out” in an ETF with similar exposure such as iShares S&P 500 Growth ETF (IVW) in the meantime, which as you can see has a very similar NAV profile to ASG. 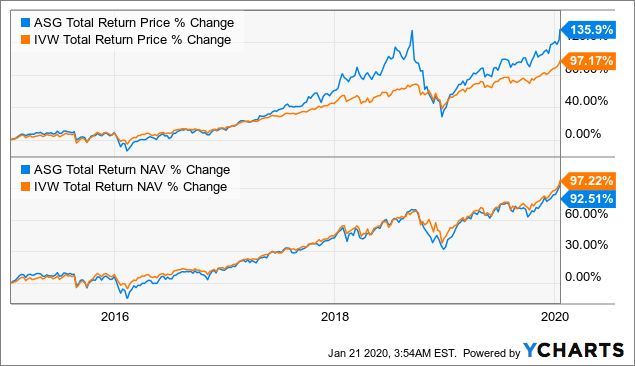 This was our most successful swap suggestion after 3 weeks, with IVW outperforming ASG by around 650 bps, equivalent of getting around 10 months’ worth of distributions from either fund “for free!”

So, what happened? As we had mentioned in our note to members, ASG did end up announcing the timing of the offering not long afterwards, and the price collapse dutifully followed. It can also be seen from the below chart that our trade suggestion would have been in the red by as much as 4-5% during the intervening period. Sometimes, these swaps don’t play out immediately! 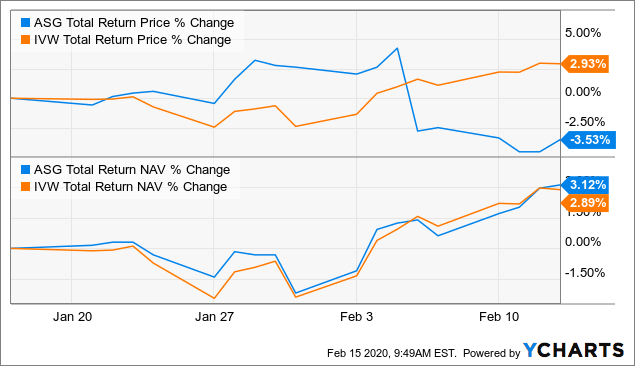 In summary, it pays to be alert about your CEF holdings. While we did not own the overvalued funds in our portfolios, it’s very likely that some of our members and followers do (given that these tickers have thousands of followers on SA), and they could have easily saved the equivalent of months of distributions from their funds with a few clicks of their mouse. This gain can be converted either into “free shares” of the existing position, or if a constant exposure to the sector is desired, the surplus can be retained in cash, as a form of “free dividends.“

Two of the three swap suggestions still haven’t fully played out yet though, so those who own PSF and MFV could still consider acting and harvesting that juicy premium! With regard to ASG, the best course of action to take for its ongoing rights offering is currently being discussed with our members in our active chat room at CEF/ETF Income Laboratory.

Closed-end funds offer a unique way to capture value, as discounts and premiums often skew for no apparent reason other than limited supply and demand. We use a deep statistical approach to highlight such cases for our members.

And the best part of our swap strategy? There’s no market timing required. You’re still getting your desired exposure to your target sector and preferred management team, but simply swapping between similar funds that achieve this. This way, you’re generating alpha and getting “free shares” on your position no matter whether the market is up, down or sideways!

We’re increasing prices at the end of this month. Beat the price hike and lock in current rates for life! 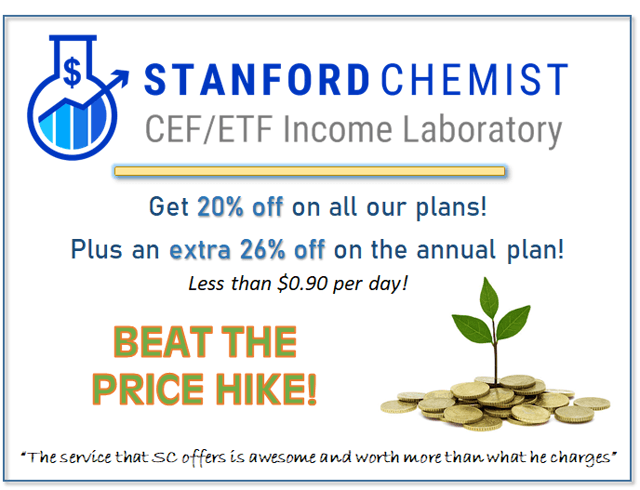 At the CEF/ETF Income Laboratory, we manage market-beating closed-end fund (CEF) and exchange-traded fund (ETF) portfolios targeting safe and reliable ~8% yields to make income investing easy for you. Check out what our members have to say about our service.

Disclosure: I am/we are long THE STOCKS IN THE PREMIIUM PORTFOLIOS. I wrote this article myself, and it expresses my own opinions. I am not receiving compensation for it (other than from Seeking Alpha). I have no business relationship with any company whose stock is mentioned in this article.

grandriver A couple of weeks ago, Range Resources (NYSE:RRC) released its results for the third quarter of 2022. Earnings were slightly better than expectations and the market reacted positively with the stock recording a +10% […]

KLH49 Do you follow me on Twitter? If so, you probably saw this teaser the other day: “What does Ida Fuller have to do with @RealtyIncome – ticker $O? Stay tuned…” It’s an interesting story […]