Each of these REITs offers investors a solid dividend yield and a reasonable payout ratio on FFO (Funds from Operations).

We’ll be using one strip center REIT, Brixmor Property Group (BRX), which trades at a lower multiple of FFO but will likely exhibit much lower dividend growth in the future. For investors who focus on current income, this will be the stock that sits out. BRX is in our fairly valued range. The current valuation reflects the risks within the retail space without becoming overly pessimistic.

Then, we move on to data centers. Investors will get a higher FFO multiple and a lower dividend yield with Digital Realty Trust (DLR.PK), but we expect much faster dividend growth in the future. For dividend growth investors, DLR will stand out because of its rapid growth in revenue, which drives growth in FFO per share and dividends. DLR is in our bullish range. Competition from new development can slow growth slightly, but the best data center operators have a competitive advantage from their global reach, enabling them to provide superior service to large customers.

Finally, we’ll cover one apartment REIT. Mid-America Apartment Communities (MAA) offers pretty good dividend growth but isn’t likely to keep up with DLR. It trades a high multiple of FFO relative to prior periods and a similar multiple relative to peers. It is quite unusual for MAA to trade at a multiple similar to peers – it would trade at a lower multiple. MAA is in our overpriced range. The housing REIT sector can be quite attractive due to long-term fundamentals, but recent valuations are pushing future returns materially lower.

We will start with a strip center REIT.

Brixmor Property Group is a strip center REIT. The strip center REITs have a great deal in common with mall REITs, but the anchor properties are often grocery stores. BRX may prove viable for trading, but the real strength lies in the buy-and-hold proposition. Well, at least we can say that it used to lie in the buy-and-hold proposition. Shares were on a great sale about 2 years ago. 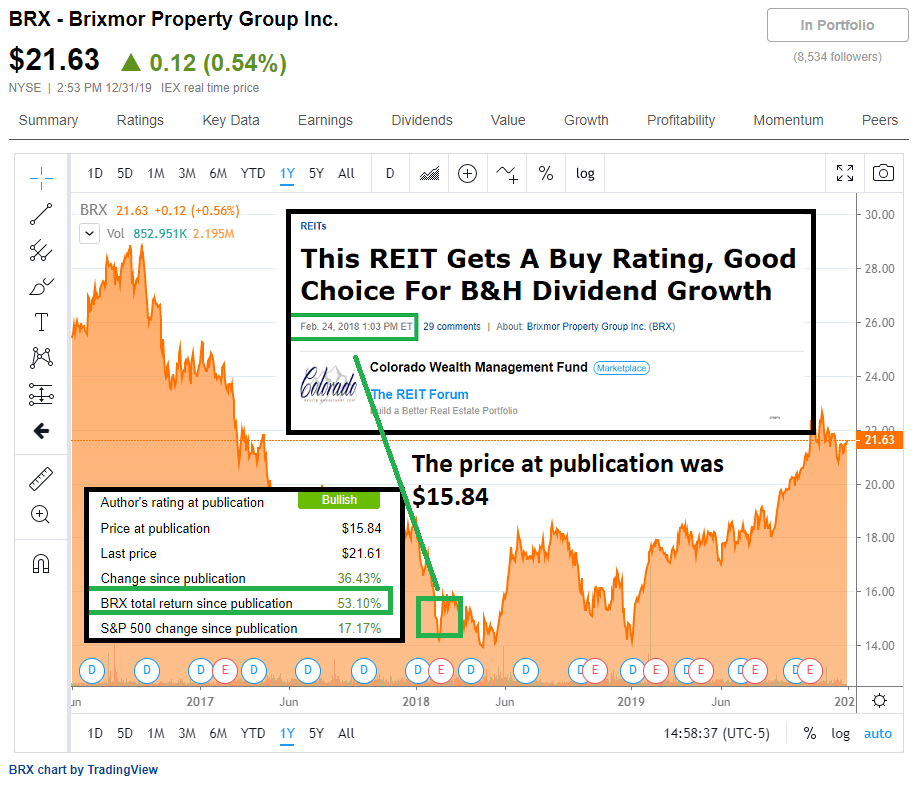 We highlighted BRX because the strip center REIT traded at a very cheap valuation. It has a great management team, and the portfolio was positioned to succeed. 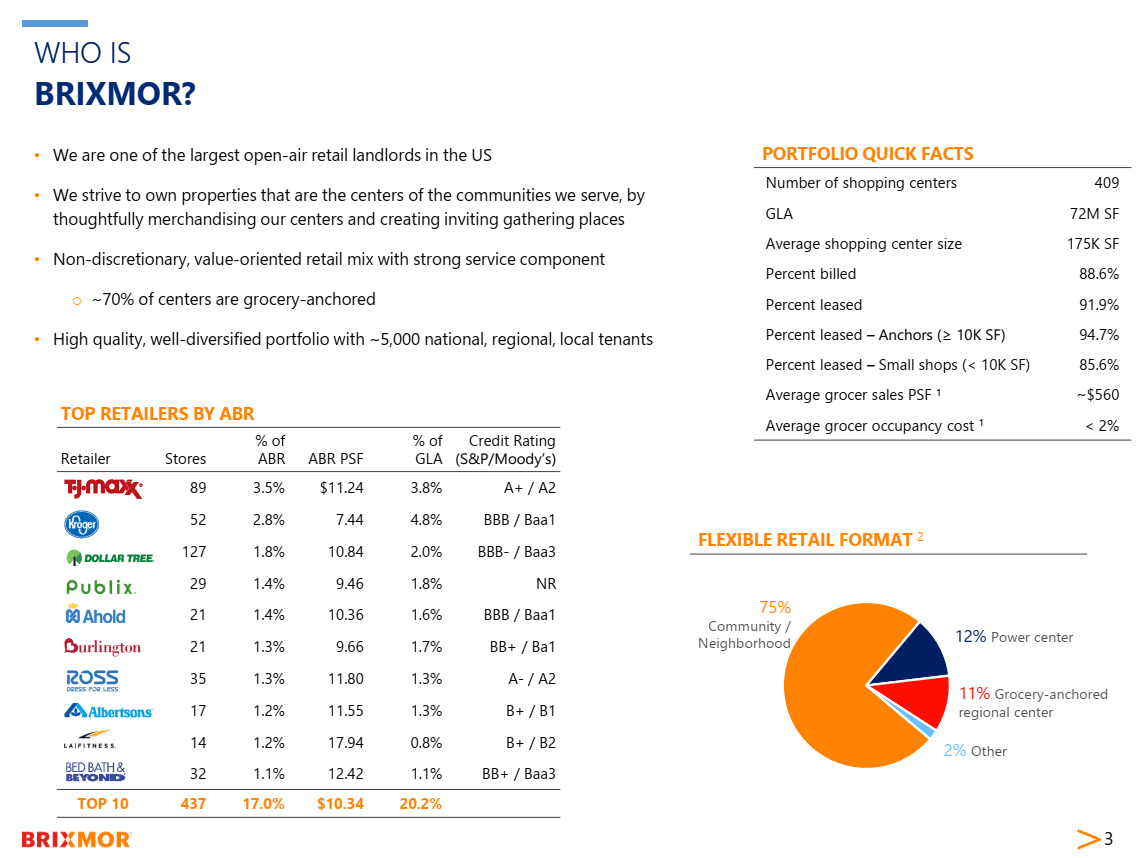 Many investors didn’t like BRX because the average quality of its strip centers was lower than the average quality for many of its peers. That was a legitimate criticism, but the result was BRX trading at an exceptionally low multiple of FFO and a very high dividend yield. Despite the high yield, the REIT was providing surprisingly good dividend coverage.

BRX had its work cut out for itself. The company needed to reduce the presence of low-quality properties in its portfolio, and it needed to deleverage the balance sheet. That can be a difficult combination because it requires selling assets and paying down debts. However, BRX has succeeded: 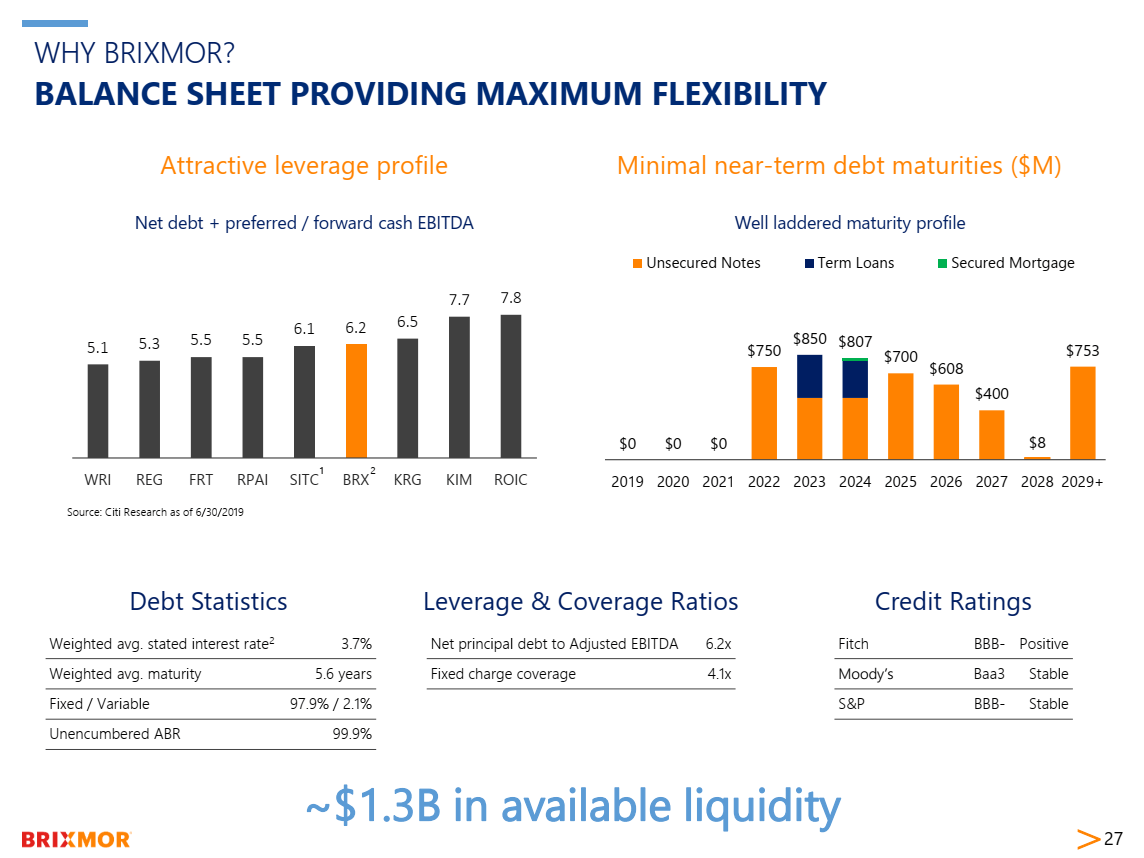 Let’s switch over to an alternative sector. REITs invest in quite a few areas, and the data center space is quite interesting. 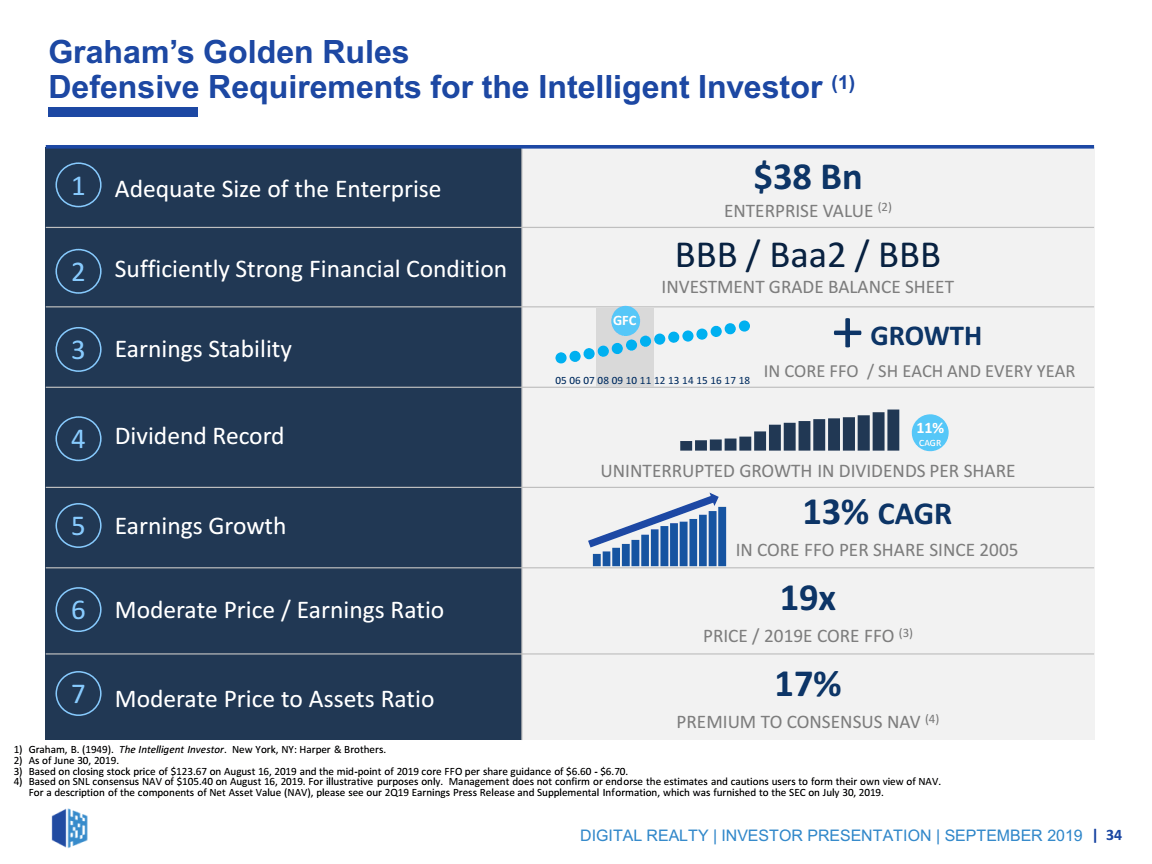 Shares carry a risk rating of 2 and the company has a credit rating of BBB. The dividend yield is reasonable as well. The yield is easily covered by FFO. FFO is like earnings per share designed for REITs. Even after adjusting for the cash spent to maintain properties, the dividend is still easily covered.

We see multiple positive factors for the data center sector.

DLR is attractive for a few reasons: 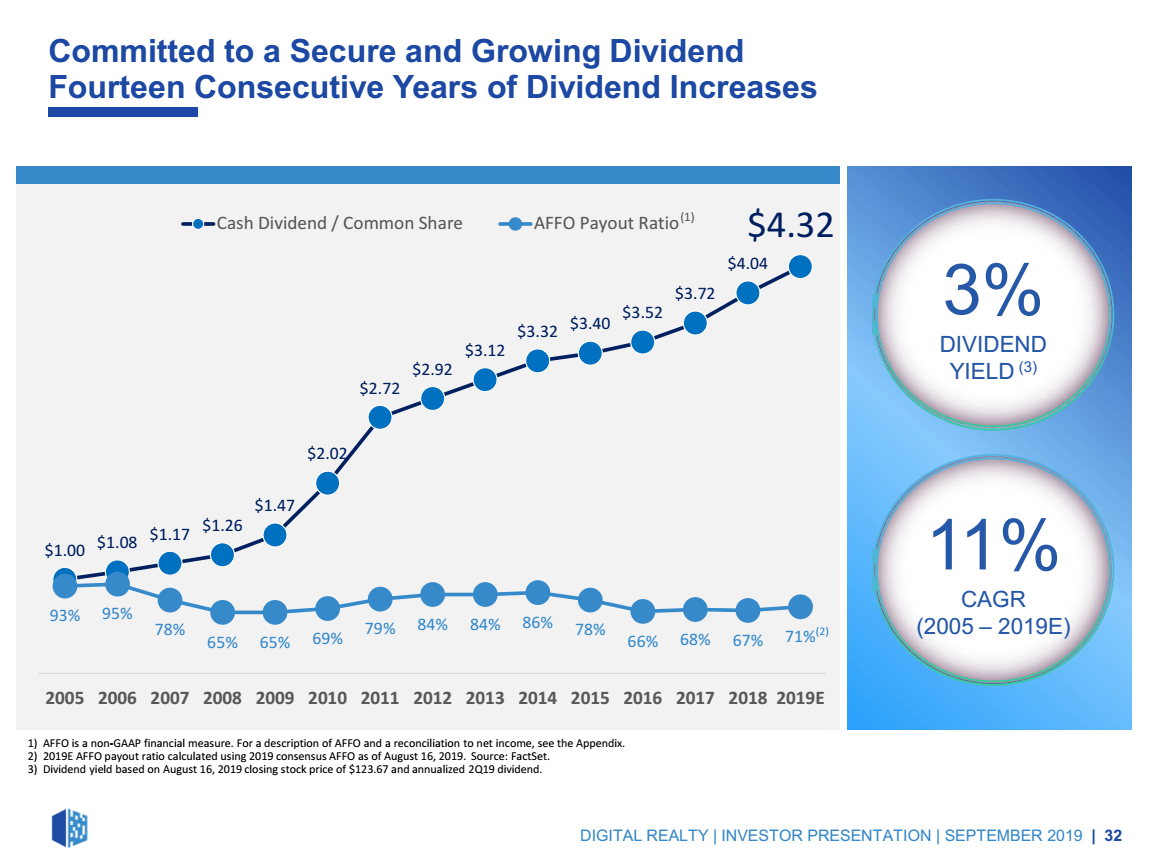 2. The REIT is being responsible with its leverage, as evidenced by the BBB credit rating and its net debt-to-EBITDA multiple of 5.5x 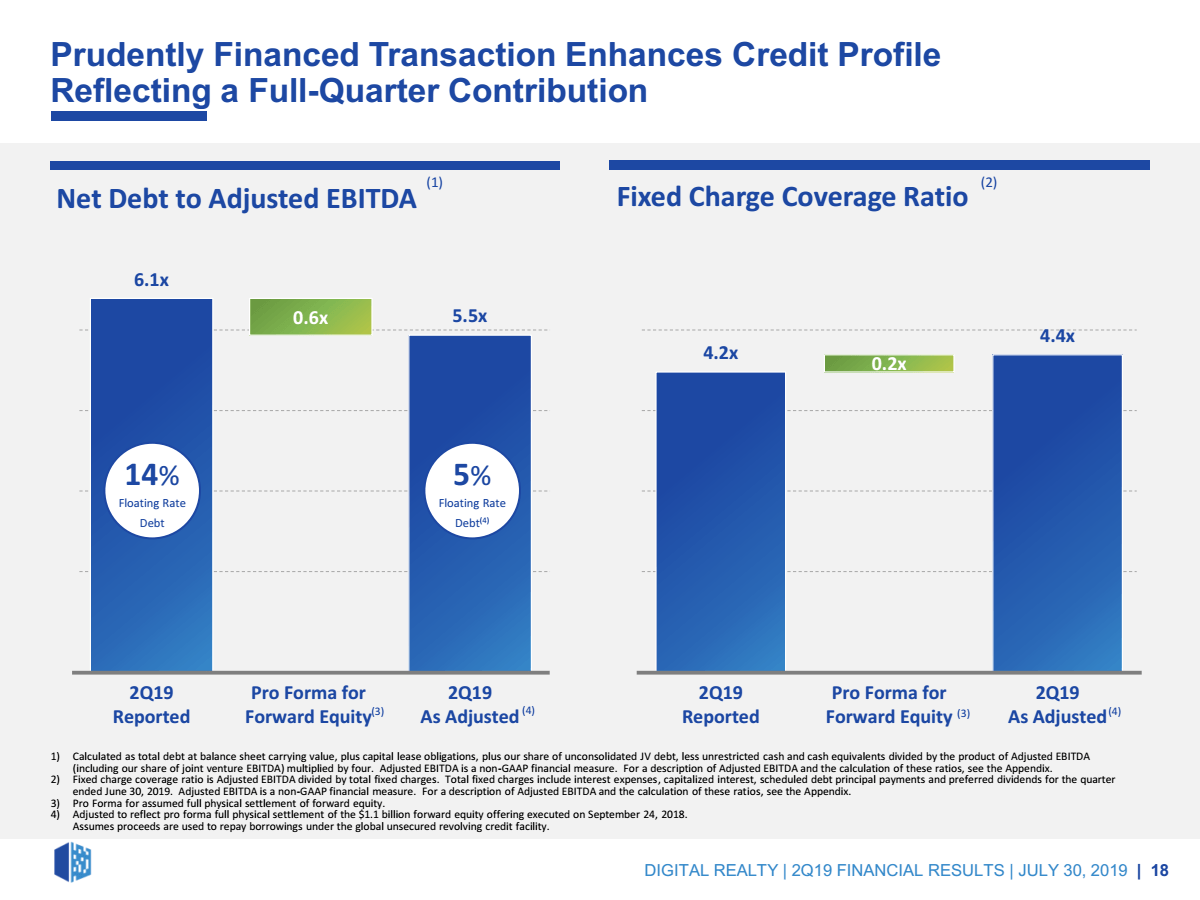 3. DLR has excellent economies of scale. It is in the top 10 largest REITs and is the second-largest data center REIT. 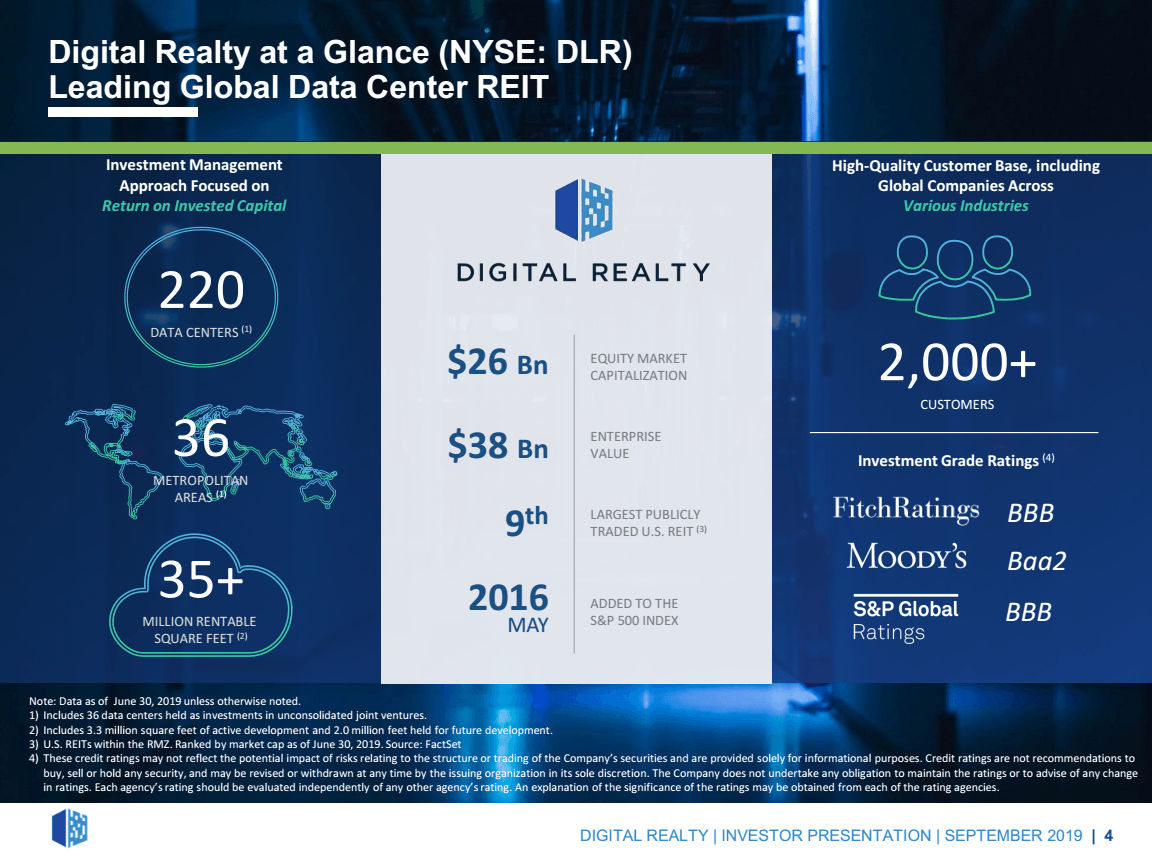 4. It owns high-quality assets throughout the world. The geography of the portfolio is providing diversification for investors. 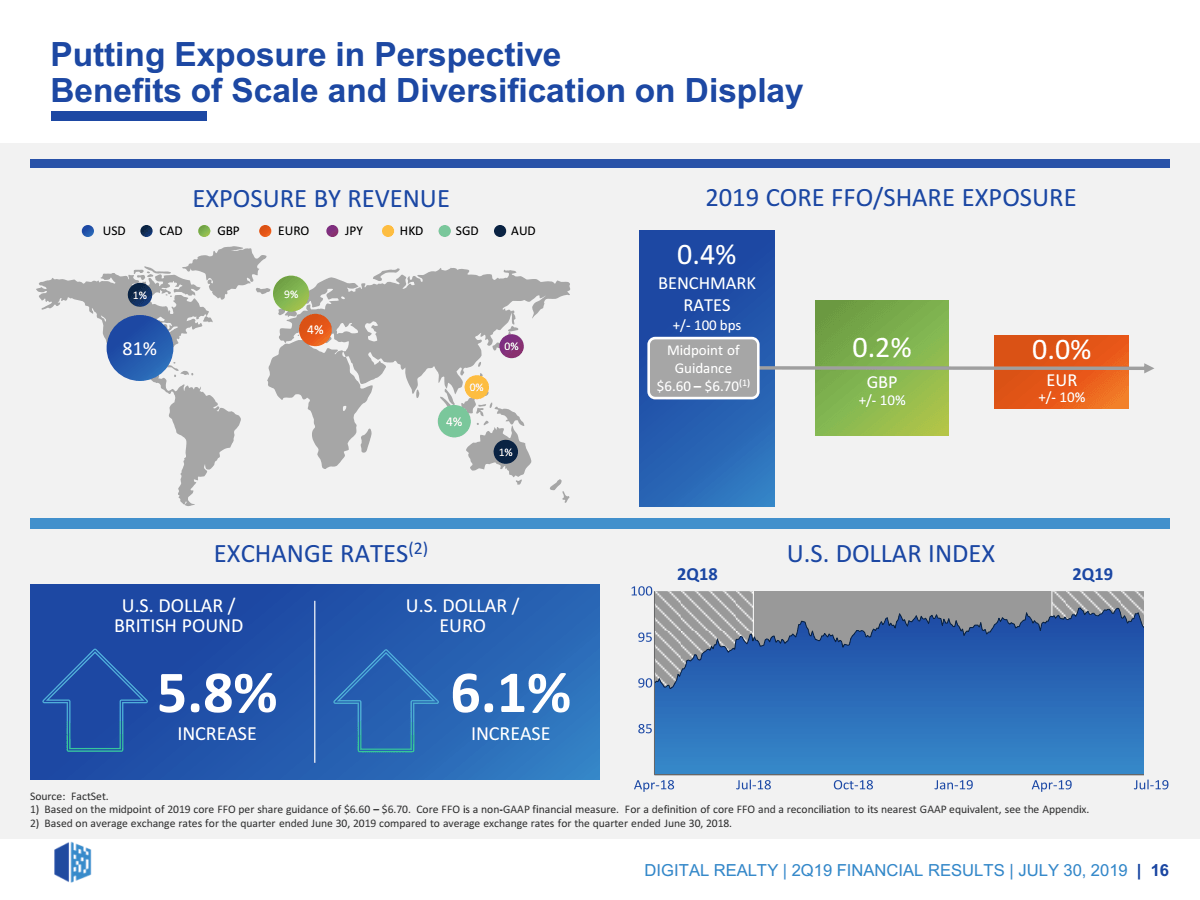 Those are quite a few advantages for a REIT trading at less than 20x projected FFO.

We can now hop over to the apartment REITs.

Mid-America Apartment Communities is the only major apartment REIT with no exposure to California. 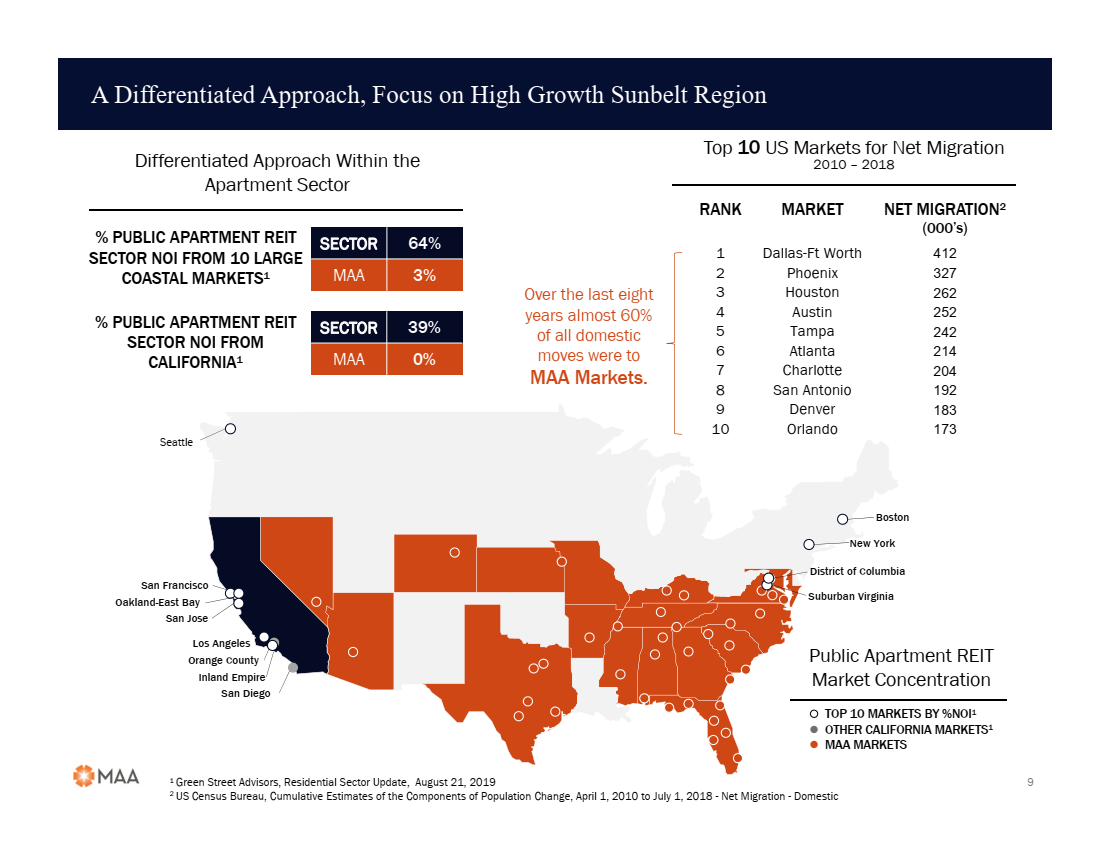 That may seem like a peculiar claim, but it’s very important to MAA’s identity. As the only apartment REIT with zero exposure to California, MAA has a unique role in the investor’s portfolio. If the investor wants to reduce the importance of California to their overall portfolio, they can increase their position in MAA and decrease their position in other apartment REITs.

MAA has a broad diversification of properties throughout the Sunbelt region: 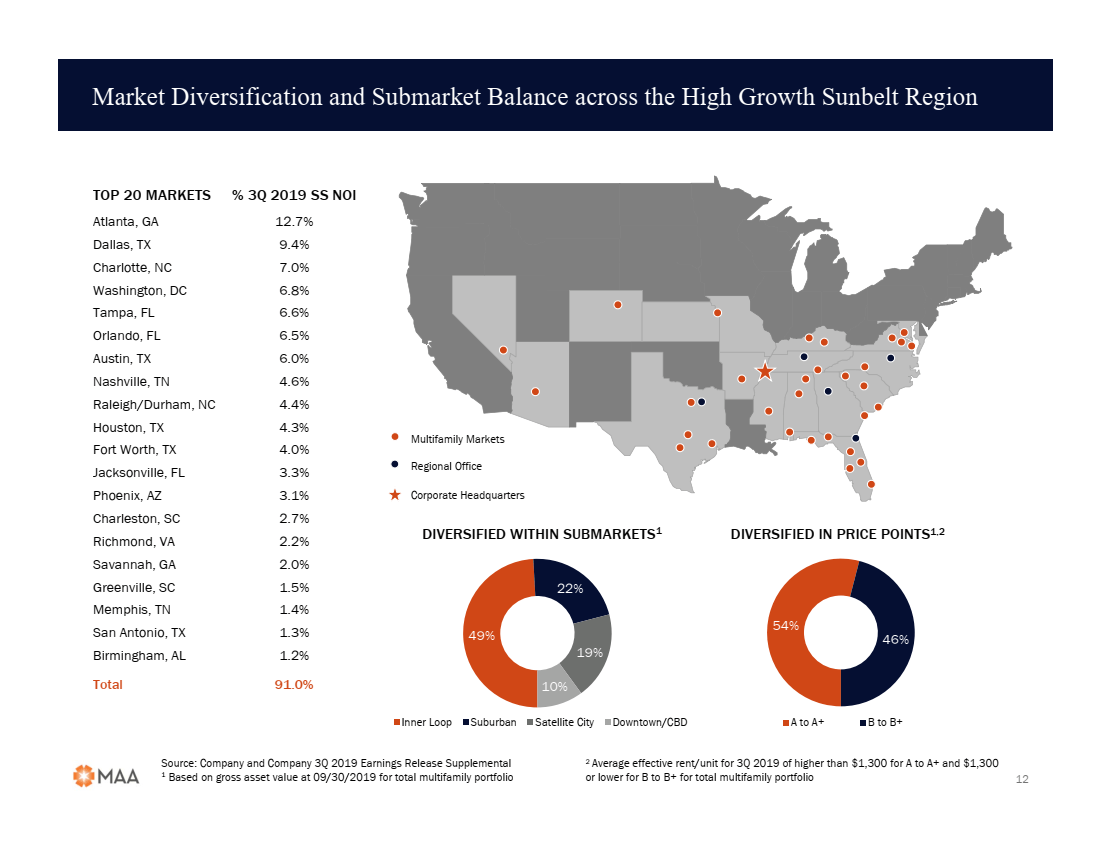 It has focused on the high-growth properties within the Sunbelt region for more than 25 years. Further, within the United States, it is one of the largest owner/operators of apartments. MAA invests in markets that consistently rank among the highest for jobs, migration, liveability, and population growth. A few of those top markets are Dallas/Fort Worth, Atlanta, Orlando, and Houston.

When were we bullish? 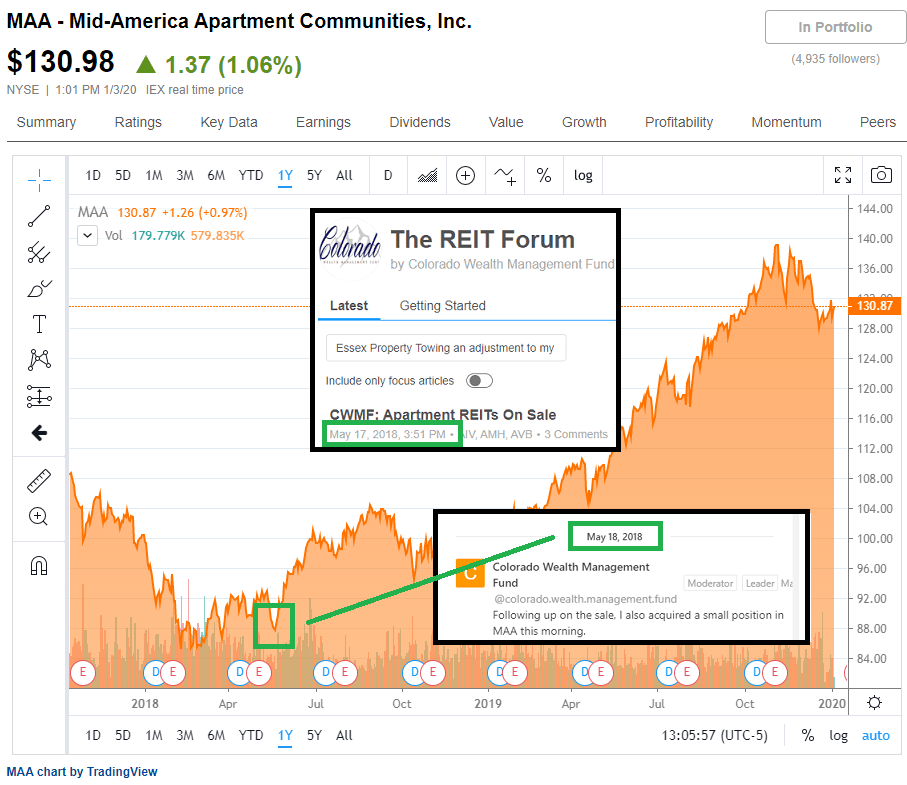 It was a great time to buy MAA. Since then, the shares have materially outperformed every other major apartment REIT. The difference is significant. While the entire sector is up, our position in MAA has already delivered returns of 67.19% as of 1/3/2020.

The appeal of Mid-America Apartment Communities

Investors find MAA much more appealing today, as evidenced by the dramatically higher share price. While FFO per share is growing, it did not grow by anywhere near 50%. 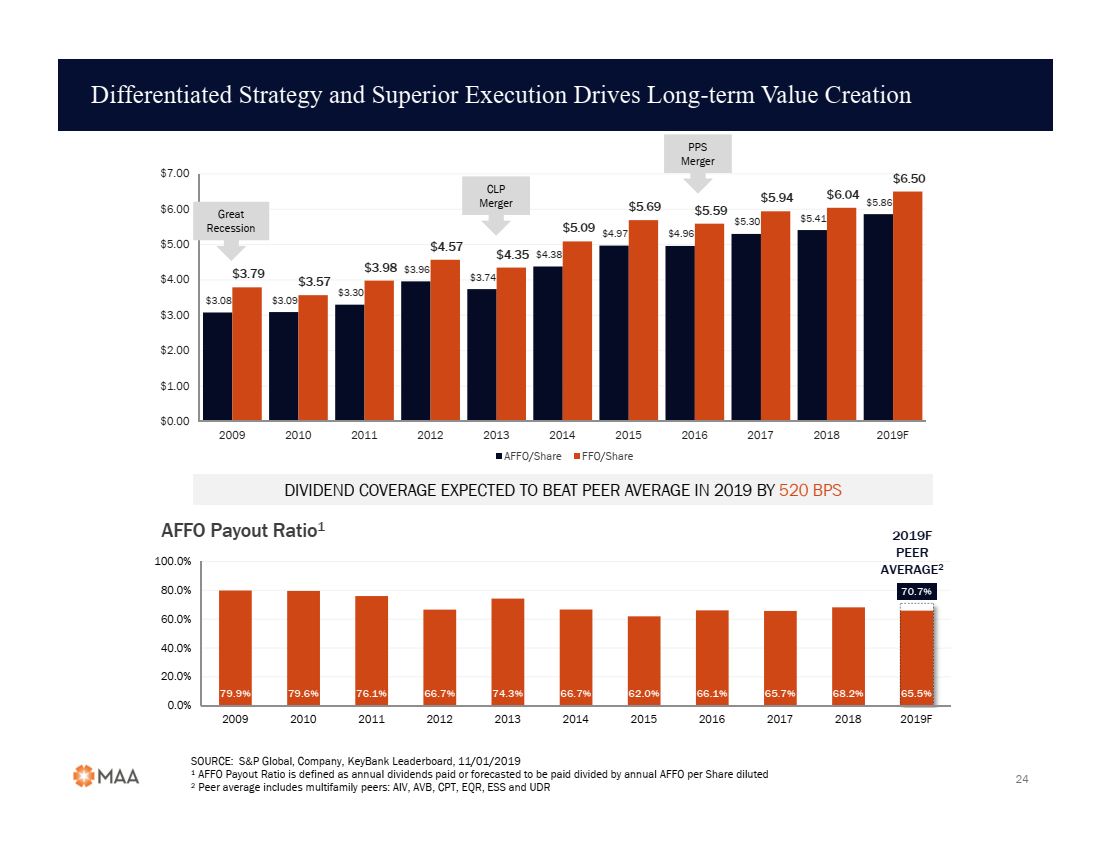 It’s unlikely to grow much faster than 3-7% yearly over a long time period. 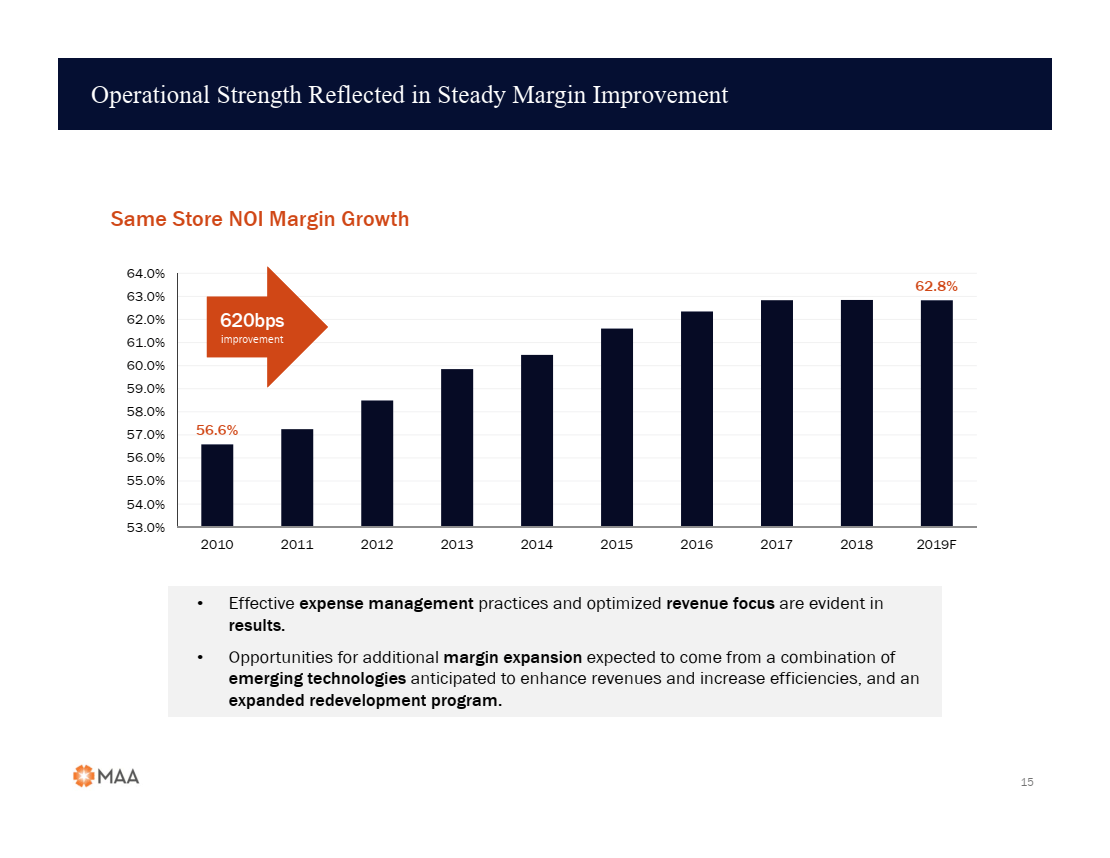 We expect to generally see slower growth for strip centers than for apartments. BRX also has a fairly high payout ratio and will still need to support quite a bit of capitalized expenditures to maintain its properties, plus a bit more for enhancements. The company won’t have all that much left after dividends, though. Consequently, we expect dividend growth for BRX to be dramatically lower for the foreseeable future.

By contrast, we see some value in the data center space. The demand case is pretty compelling. Do you think that in 5 years you’ll consume more or less bandwidth? Do you think large companies will need more or less bandwidth? Since you’re probably saying “more” to both, let’s try a harder question. Can you name 3 people you expect to be using less bandwidth in 5 years than they do today? We see demand driving strong growth over the long term, though the growth may be a bit lumpy from year to year.

We expect apartment REITs to continue delivering pretty solid growth in FFO per share and dividends per share. That makes them attractive for many investors, but the entry price on MFA doesn’t look particularly attractive right now. It’s a great REIT, but is trading at a painfully high multiple of earnings. If you’re paying over 21x earnings (using FFO), you need to expect strong growth rates, not merely “pretty solid”.

Want the best research? It’s time to raise your game. Get access to several features you won’t find on the public side.

You can get access to everything we have to offer right now. Try our service and decide for yourself.

Disclosure: I am/we are long DLR, MAA. I wrote this article myself, and it expresses my own opinions. I am not receiving compensation for it (other than from Seeking Alpha). I have no business relationship with any company whose stock is mentioned in this article.